Jack (Christian Bale) is arrested at the rally, and it is revealed in court that his name is really Francis Sullivan, his mother is dead, and his father is in jail; and he’s sent to the Refuge until he’s 21.

That night, he is bribed by Pulitzer (Robert Duvall) to sell papers for him again. At first, he says no, but when Pulitzer threatens to put David (David Moscow) in jail, he has no choice but to agree.

All the newsies are upset by Jack’s betrayal of them, but when the Delancey brothers start beating up David, Jack saves him.

Denton (Bill Pullman) agrees to help Jack, David, and Sarah make their own paper, and using the printing press in the basement where Jack has been sleeping, they print an article getting all the kids from the sweatshops to join with them, as well as expose the truth about the way the Refuge is run.

All the kids join the newsies in Newsies Square, and Pulitzer gives in and lowers the price again. Denton brings the paper to his friend Teddy Roosevelt, who has Warden Snyder arrested and the kids from the Refuge released.

Jack leaves to go to to the trainyards so he can go to Santa Fe, but he comes back to be with the family he finally realized he has (including Sarah, who he kisses). 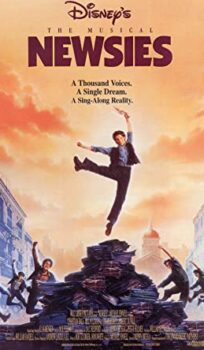