Based on the novel by Charles Dickens

POOPER
Upon learning that his business reputation is ruined and that Smike, his son, was the best friend of his enemy, Ralph commits suicide. The Nickleby’s return to Devonshire, where Nicholas marries Madeline and Kate marries Frank.

LONG VERSION
After the death of their father leaves the family without an income, Nicholas Nickleby (Charlie Hunnam), his sister Kate, and their mother leave their country home in Devonshire and travel to London to seek help from their only remaining family:  the wealthy but cold-hearted Uncle Ralph (Christopher Plummer).  Ralph takes an immediate disliking to Nicholas, but he arranges for him to take a job as a teacher at Dotheboys Hall, an all-boys school in Yorkshire, and for Kate to take a local job as a seamstress.  Upon arriving at Dotheboys, Nicholas is horrified to see that the school is run by Mr. and Mrs. Squeers like a prison, and the boys are constantly physically and verbally abused.  The Squeers are especially cruel to their groundskeeper Smike (Jamie Bell), a crippled boy who was once a student but now works for the school because his family stopped paying.  Nicholas tries his best to teach the boys despite the abuse, and he and Smike become friends.  At Nicholas’ urging, Smike attempts to escape Dotheboys, but he is caught by the Squeers.  As they are about to beat Smike “to an inch of his life”, Nicholas snaps, takes the whip away from Mr. Squeers (Jim Broadbent), and proceeds to beat him with it.  Nicholas and Smike then take their meager belongings and flee the school.

During their journey back to London, Nicholas and Smike come across a theatrical troupe, led by Mr. and Mrs. Crummies (Nathan Lane and Dame Edna).  The troupe is heading to Liverpool to put on a performance of Romeo and Juliet, but since their lead actor is unable to perform, they decide to cast Nicholas in the role of Romeo and also give Smike a role as the Apothecary.  Despite having no acting experience, they accept the roles, and the show is a hit.  Following the performance, the Crummies offer permanent employment to Nicholas and Smike, but Nicholas declines because he wants to return to London to be reunited with his family and to help Smike find his.  Now back in London, Nicholas reunites with his family, and Kate and their mother quickly accept Smike into their home.  Determined to support his family without the help of Ralph, Nicholas soon finds work as a clerk in the offices of Charles and Ned Cheeryble.  While working for the brothers, Nicholas meets Madeline Bray (Anne Hathaway), an aspiring artist who is the sole provider for herself and her father, who gambled away their life savings.  Madeline’s late mother was once a girlfriend of Charles, and he has been secretly buying her paintings to help support her and her father.  Charles now has Nicholas buy her paintings for him, and they soon begin a relationship.

Nicholas soon learns that Kate is constantly being sexually harassed by Sir Mulberry Hawk, one of Ralph’s business clients.  Ralph tells Hawk that he encourages the seduction of his niece, for when she finally succumbs to his advances, the engagement would cement their business relationship.  Nicholas’ quest to defend his sister’s honor has made him an enemy of Ralph, and he now wants to destroy his nephew.  This begins with Ralph conspiring with the Squeers to kidnap Smike and return him to Dotheboys, but Nicholas is able to rescue him before the Squeers can leave the city.  With that foiled, Ralph hatches another plan.  Earlier, Nicholas publicly threatened Hawk with harm should he ever see or speak with Kate ever again.  Once Ralph learns of Nicholas’ friendship with Madeline, he tells Hawk that their business relationship can be saved if he were to become engaged to her.  Her father is also in on the scheme, because Ralph promised to cancel all of his debts if he would give his blessing to her engagement to Hawk.  But after her father unexpectedly dies, Madeline calls off the engagement, and Hawk fires Ralph.

While Ralph is coming up with another plan, Smike’s health has taken a turn for the worse.  Under doctor’s orders, Nicholas takes Smike away from the polluted London air to their old family home back in Devonshire.  While on his deathbed, Smike says that he sees the man who took him to the school in the first place, but Nicholas thinks it’s just a hallucination.  Smike tearfully thanks Nicholas for being his only friend, then dies.  A deeply saddened Nicholas buries Smike next to his father’s grave and returns to London.  Upon his return, Nicholas learns that Kate is now dating Charles’ son Frank.  He also learns from Ralph’s secretary that a major investment made by Ralph has failed, and his business reputation will be ruined once word gets out.  Now at Ralph’s home, Nicholas is confronting Ralph about the investment when another man enters the room.  It’s Mr. Brooker, a former employee of Ralph’s, and he has news for him as well:  his son has died.  Ralph says his son died years ago, but Brooker tells him that he didn’t and tells him what happened.

As a young man, Ralph married a young girl and they had a son, but she left him and Ralph left the boy in the charge of Mr. Brooker, his secretary at the time.  Wanting revenge for an earlier slight, Brooker told Ralph the boy had died, but he actually took him to Dotheboys.  He was able to pay the Squeers at first, but couldn’t pay anymore after he was fired and later sent to jail.  He saw the now-grown boy recently, and followed him everyday, including to Devonshire, where he died at the Nickleby’s house.  He knows the boy saw him before he died.  Brooker then tells Ralph the boy, his son, was Smike (making him Nicholas’ and Kate’s cousin).  Ralph then flees the room and heads to the attic, which was his son’s original bedroom.  The double whammy of learning his business is ruined and that his son was the best friend of his enemy leads Ralph to commit suicide in the bedroom.  As Ralph’s sole heirs, the family gets his inheritance and they decide to move back to Devonshire.  A short time later, a double-wedding is happening on the grounds:  Nicholas is marrying Madeline, and Kate is marrying Frank.  With the Crummies toasting the couples and the troupe entertaining the guests, Nicholas and Madeline make their way to his father’s and Smike’s graves. The movie ends with Nicholas introducing Madeline to his father, and telling Smike he will live in his heart forever.  Madeline leaves her bouquet on Smike’s grave and they return to the reception. 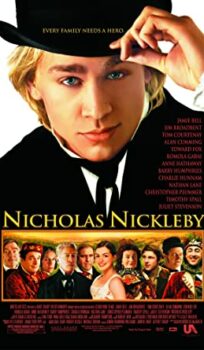