SHORT VERSION:
Judy and Rodger are the only ones who get out of Hull House alive after they cross the wall surrounding the property, which is over an underground stream (demons cannot cross over running water). The sun then rises and sends Angela and the other possessed teens to Hell.

LONG VERSION:
As the night goes on, the teenagers die and/or become possessed by the demon in Hull House until only Judy (Cathy Podewell) and Rodger (Alvin Alexis) are left. The two of them run from their demonized friends, with Angela (Amelia Kinkade) as their leader, and head downstairs to the crematorium, where the demon was unleashed from. After catching their breath, Judy eventually realizes where they are when she finds the oven, and then Angela and Stooge (Hal Havins) start banging on the door. Angela tells Rodger that all they want is Judy, but Rodger tells her to go to Hell, and she replies that they can’t do that tonight. After hearing this, and remembering the story Helen (Allison Barron) told about how Halloween Night is the night when all things unclean can roam freely amongst humanity, she rationalizes to Rodger that they must hold out in here until dawn comes, after which the demons will have to return to Hell. When the demons start to take the door apart, Judy opens the oven and breaks open the gas line inside and uses a lighter to ignite it just as the demons get in, setting them afire and making them retreat.

However, after Rodger shuts the gas off, the demons give him a scare and make him run away, and then they lock every door in the house. Judy chases after Rodger and finds him slumped down by the front door, and then Angela and some of the other possessed teens appear. Rodger hurls himself through a nearby window and gets outside, and Judy soon follows right behind him. Since the front gates have disappeared, they head for the wall surrounding the property intending to climb over it to freedom, since an underground stream lies beneath it and demons cannot cross over running water.

Rodger gets to the top of the wall first by using a length of barbed wire hanging down from it as a rope, but just as Judy climbs up and takes Rodger’s arm, all of the demonic teens come out and try to pull Judy down. Rodger falls down to the safe side of the wall and looks too scared to climb back up and save Judy, but just as the teens are about to claim her, Rodger comes to her rescue and grabs her arm, and then they both get to safety. The sun then rises and sends their demonized friends to Hell in a cloud of smoke, and Judy and Rodger see the spectral form of the head of the demon that possessed them just before it vanishes growling and snarling.

Judy and Rodger slowly walk back to their homes together in a state of shock, and they pass by the cantankerous old man from the first scene of the movie outside of his home as he is getting his morning newspaper. He goes back inside and is given a slice of homemade apple pie by his wife, but he doesn’t realize until it is too late that she made the pie with the apples he earlier stuck razor blades into as a vicious prank on the trick-or-treaters. After the blades slice through his throat and he bleeds to death, his wife – who clearly did this to him on purpose – kisses his head and says “Happy Halloween, dear.” 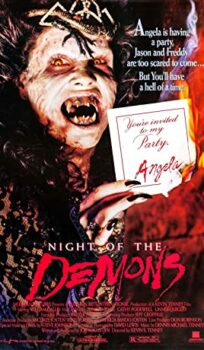