Stanton Carlisle (Tyrone Power) is a lowly carnival worker. He is appalled by “The Geek”, a sideshow attraction of a savage man who eats live chickens and apes for the crowd.  He is surprised to learn that it is not a poor fellow born that way, but a desperate alcoholic willing to do anything for a bottle.

Stanton learns the secret code of the fortune teller / mind reader.  He takes his act big time and is a sensation in Chicago. He is helped by an unscrupulous psychologist who feeds him info on her high society clients.  One powerful wealthy man is so taken in, that he gives a lot of money to hear from the deceased love of his youth.  He promises  a small fortune if he can just see her again.  Stanton sets it up with Stanton’s wife (Collen Gray) dressed like the last photo of the lady.

When the rich man falls to his knees crying, the wife can not take it, and reveals the ruse.  Stanton must flee in disgrace.  To top it off, the psychologist makes off with all his money so he is penniless.  Stanton becomes a skid row bum.

The carnival comes to town.  Stanton tries to get hired to do his old mind reader act.  Instead, he is hired- as “the geek”. 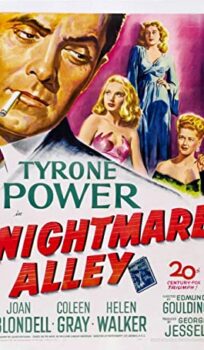