Despite the Government’s desperate, numerous attempts to bring down and boycott the efforts of the advertising body and coalition backing the “No” side of the referendum, which included: blatant mockery of the TV spots; violent repressions of peaceful marches, with people getting beaten and arrested -in one of which Verónica (Antonia Zegers), René’s (Gael García Bernal) ex and mother of their young son Simón (Pascal Montero), is taken away but later released-; censorship of any depiction of the dark side of Pinochet’s regime; and even a sudden blackout on the night of the referendum…

The opposition to the regime galvanizes and the “No” wins the referendum, with a 56% of the votes on their favor, versus a 44% for the “Yes” side -which aimed to keep Pinochet in power, at least, until 1997.

The movie ends with people massively celebrating the results, which marked the upcoming end of the Dictatorship and the beginning of a new age of Democracy for Chile. Also, René and Lucho (Alfredo Castro) – who had defected to work for the “Yes” campaign, out of fear for his career- make up and reassume advertisement duties together. The final scene shows them working on a new campaign that promotes a future telenovela (soap opera). Also, the final credits show clips of the 1990 inauguration of Patricio Aylwin, the first Democratically-elected President since the 1973 coup d’état that had brought Pinochet to power. 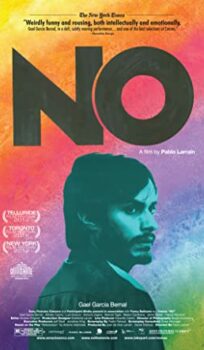