Susan (Amy Adams) is an art dealer who receives a manuscript written by her ex-husband (Jake Gyllenhaal) and dedicated to her.  The story is about a man who is accosted by three men on the highway, who end up raping and murdering his wife and daughter.  As he tries to achieve justice, the man becomes depressed, having been too meek to have defended his family when they were in danger.  In the end of the book, he learns to express his anger and single-handedly shoots the man responsible but also ends up wounded and accidentally shoots himself through the heart.

As the story is read, we learn more details about Susan’s marriage to the author – Twenty years ago, she was pressured by her family not to marry him because he was sensitive and wouldn’t achieve anything, which she eventually began to believe, cheating on him with someone else and having an abortion to escape co-parenting with him.  The book was a metaphor of how his lack of aggression led to losing both his wife and child.  As Susan’s life begins to feel empty, her own marriage is troubled, and she discovers the artistic genius her ex-husband harbored all along, she agrees to meet with him only for him to stand her up as his ultimate revenge. 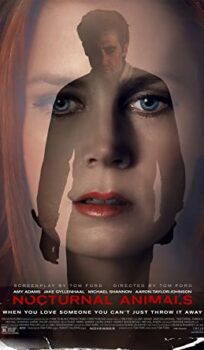