POOPER:
After defeating the Wolves, the 5 remaining survivors (Asbjorn, the monk, the princess, and two other Vikings) get away from the King and his army and make it onto a boat towards the Viking settlement of Danelaw.

LONG VERSION:
A group of Vikings encounter a storm, destroying their ship and killing many of the men on board.  The survivors wash ashore on the Scottish coast, where they are promptly met by an army patrol.  The Vikings are able to kill the soldiers, but one gets away.  Some of the Vikings are killed in the battle, so there are only seven survivors left, led by Asbjorn.  The soldiers were guarding Princess Inghean, who was on her way to her wedding.  The Vikings know that their settlement is at least 3 days away on foot, and they’re sure to meet more soldiers before they can get there, so they decide to take Inghean prisoner, and the ransom for her release can be used to buy their freedom.  Meanwhile, the surviving soldier shows up at a castle, where he tells Inghean’s father, King Dunchaid, that they were attacked by Vikings and have taken Inghean hostage.  The King then orders his best troops to kill the Vikings and rescue Inghean.  If they cannot rescue her, then they are to mercy kill her.  However, the troops, led by Bovarr and his brother Hjorr, realize that if the wedding between the princess and her future husband occurs, they could be replaced by the husband’s army, so they tell the troops the King’s order is to kill the princess.

While traveling through a forest, the Vikings meet a Christian monk who promises to find them shelter.  He immediately earns their trust by single-handedly driving away a band of Highlanders, killing some of them in the process.  The next day, the troops encounter the Highlanders, who tell them that the Vikings and the princess are with the monk, who probably took them to his old monastery.  At the monastery, where the Vikings were given shelter, one of the injured Vikings dies, leaving just six survivors.  That night, just after the Viking funeral for the fallen man, the troops reach the monastery.  The Vikings capture one of the King’s messengers, who tells them that they are under orders to kill the princess.  Meanwhile, the troops are burning down the monastery, but the Vikings, the monk, and the princess escape through an underground tunnel.

Once they’ve emerged from the tunnel, the monk tells the Vikings of a path to the sea, where there are boats hidden in caves that can take them to the Viking settlement of Danelaw.  And thanks to them, now he will need safe passage there.  The princess then tells them that the troops following them are known as the Wolves, a band of mercenaries hired by the King to kill his enemies. Once she is Queen, she will banish them, but since she is now marked for death, she needs safe passage as well.  So the eight travelers head out towards Danelaw, setting up booby traps along the way to slow down the Wolves.  The next morning, the Wolves approach the sleeping Vikings.  The Vikings fight back and are able to get away, and some of the Wolves are killed by the traps, but one of the Vikings dies in the skirmish.  They are chased to the edge of a ravine, but there is a rope bridge that gets them to the other side.  Before all of them can cross, there is another skirmish, and another Viking dies and another falls off the bridge.  Asbjorn and the rest make it across and cut the ropes to the bridge.  The Wolves have suffered heavy losses in these skirmishes, but there are still a few left, including Bovarr and Hjorr.  As the Vikings run away, the Wolves see a path to the other side of the ravine.

With the coast in sight, the 5 tired travelers are crossing a moor when the Wolves approach again.  This time, they choose to stand their ground and fight one last battle.  Just as it appears the Vikings are done for, the Viking that fell off of the bridge appears, and the now re-energized 6 fighters are able to finish off the Wolves, which includes killing Bovarr and Hjorr.  However, a Viking died, so it’s back to 5.  Now at the coast, the Vikings see that the caves with the boats are now underwater.  Just then, the King and hundreds of soldiers appear.  As everyone is readying for another battle that they know they’ll lose, Asbjorn jumps off the cliff into the water, and swims into a cave.  He emerges with a boat, and as the soldiers are about to attack, everyone else jumps off the cliff.  The movie ends with everyone climbing into the boat and sailing away towards Danelaw. 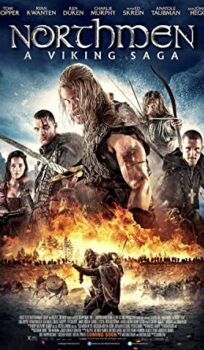