POOPER:
FBI agent Dylan Rhodes (Mark Ruffalo) has been in on the scheme the entire time. He is the son of the magician that drowned in a failed magic act. Daniel (Jesse Eisenburg), Henley (Isla Fisher), Jack (Dave Franco) and Merritt (Woody Harrelson) frame Thaddeus (Morgan Freeman) for stealing the money. Daniel, Henely, Jack and Merritt are inducted into The Eye by Dylan. What the eye is, is never explained but we assume its a secret society of magicians.

LONG VERSION:
A mysterious, cloaked stranger brings together four magicians, (J. Daniel Atlas – Jesse Eisenberg, Merritt McKinney – Woody Harrelson, Henley Reeves – Isla Fisher and Jack Wilder – Dave Franco) to join a secret fraternity called “The Eye”. Before the four can join, they must put on a series of shows, where they rob from wealthy institutions that have taken advantage of people and return the money to those affected. They call themselves “The Four Horsemen.”

The first show, in Las Vegas, ends with the robbery of a bank in France, using the banks own president for the trick. The FBI is called in, and the Four Horsemen are arrested and questioned by Agent Rhodes (Mark Ruffalo) and Interpol Agent Alma Dray (Mélanie Laurent), who have no idea how the trick was done, until Thaddeus Bradley (Morgan Freeman), a former magician himself, who made his fortune selling DVD’s and Digital Downloads of how magic tricks were/are performed, shows them how the trick was done. In this case, it was hypnotic suggestion and a replica bank vault, located under the stage, which the bank president was dropped into, thanks to a false bottom on the stage floor.

At the end of their second show, The Four Horsemen steal 140 million dollars from their financial supporter, Arthur Tressler (Michael Caine) and return it to the audience members; all of whom were wrongly denied claims by Tressler Insurance, over the years. They leave Arthur Tressler with only 4 million dollars and return to their safe house to dispose of all evidence, such as notes and blueprints of the robberies. They leave Jack Wilder to finish getting rid of the evidence and go get ready for the third robbery.

With only one piece of evidence left for Jack Wilder to destroy; Rhodes, another agent and a SWAT Team arrive at the safe house. Jack Wilder manages to escape and steal an FBI vehicle. During the chase, he loses control and crashes. The car catches fire, and though he tries, Rhodes can’t pull Jack Wilder out before it explodes. Rhodes does manage to grab the evidence before it burns.

The third and final trick, of a stolen safe in a cargo truck, is just a decoy so they can get away from the FBI. The money that was in the safe is left in Thaddeus Bradley’s Land Rover. In fact, evidence in all 3 robberies, including the piece from the fiery car crash, leads to Thaddeus Bradley and no one else.

Agent Rhodes goes to Thaddeus Bradley’s cell, to tell him that he will spend the rest of his life in prison and to reveal who he really is… Agent Rhodes is the mysterious cloaked stranger [and leader of The Eye]. His father was a famous magician, until Thaddeus Bradley revealed how his tricks were done. In an effort to reclaim his fame, Rhodes father attempts an “escape from a safe while underwater” trick. He locks himself in a safe and is dropped to the bottom of the river. Since the safe was made from cheap and faulty parts, it buckled under the weight of the water, and he was trapped inside; resulting in his death. Since his body and the safe were never found, Arthur Tressler’s Insurance Company denied the Life Insurance claim and Rhodes family was left with nothing. Rhodes, who was 12 at the time, swore revenge on both Thaddeus Bradley and Arthur Tressler.

Later that night, the three remaining Horsemen meet up at the park. Jack Wilder comes out of the shadows, and we learn that it was just another illusion by the horsemen, using an identical car and a body stolen from the morgue. Rhodes then steps out and reveals himself to the Horsemen and invites them to join The Eye; they accept.

Sometime later, Rhodes returns to France and meets with Interpol Agent Alma Dray. He tells her why he did what he did and she tells him that she understands and promises to keep his secret. 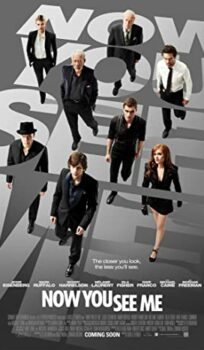