Pooper:
Lennon learns about his past and after reflection, decides to accept his mother for who she is. He goes to college and continues to pursue his musical interests. After his mother dies, Lennon accepts his Aunt Mimi as his parent and gaurdian and calls her every week for the rest of his life.

Long Ending:
This biopic explores the teenage years of Beatles/music legend John Lennon. The movie opens as we see a teen-aged John Lennon (Aaron Taylor-Johnson) living with his overly strict Aunt Mimi (Kristin Scott Thomas) and fun-loving Uncle George. He has lived with them as long as he can remember. John is not a good student, but is very intelligent and fun-loving. John is also prone to fits of anger and has dreams about a troubled childhood.

His Uncle George dies unexpectedly and John is upset when Mimi doesn’t show any real emotion. At the funeral, he sees his mother Julia (Anne-Marie Duff) in the crowd. John convinces his cousin to help him locate Julia’s whereabouts and discovers that she lives a few miles away with her husband and John’s half-sisters. The two reconnect and grow closer (despite the disapproval of both Mimi and Julia’s husband). Like John, his mother is emotionally volatile and fun-loving. She also introduces him to the music and style of Elvis Presley, which greatly influences John.

After John gets suspended from school, he gets in a fight with Mimi over the importance of education and moves in with Julia. While there, Julia teaches John to play the banjo. One night, John overhears Julia’s husband berating her for taking John in. Distraught, John returns home to Mimi. The two patch up their differences and Mimi agrees to buy John a guitar if he will focus his efforts at school. Instead, John forms a band called the Quarrymen and focuses his efforts on music. Mimi also becomes more emotionally available and supportive of John, realizing that she doesn’t want to lose him as a part of her life.

The Quarrymen perform at a local fair and are surprisingly good (singing a rock version of an old folk song Julia had taught John). One of John’s friends introduces John to the very talented Paul McCartney (Thomas Brodie Sangster), a younger and dorkier boy. Despite initial reservations, John lets Paul into the band and Paul soon begins teaching John how to become a better musician. Paul also encourages John to turn his poetry into song lyrics. Ultimately, Paul introduces John to a very talented guitarist named George Harrison, who also joins the band. When John’s report card is unsatisfactory, however, Mimi destroys his guitar. Their relationship deteriorates again and John gets Julia to buy him a new guitar.

John’s band throws him a birthday party at Julia’s house. While there, John gets drunk and grows jealous as Julia comforts Paul after hearing that both of Paul’s parents died when he was a child. John confronts his mother, asking why she drove off his father and abandoned him. Julia responds that his father (who was a sailor) abandoned her and that Mimi essentially “kidnapped” John from her since she was young and had no money. John still blames Julia for not ever trying to take him back into her home and storms off to Mimi’s house with Julia close behind.

The two arrive at Mimi’s house (where she had planned a surprise party and bought John a new guitar). Mimi and Julia argue and Mimi reveals that John’s father hadn’t abandoned them. In fact, Julia had an affair with another man while John’s father (who she was married to) was off at sea. When John’s father returned, Julia refused to reconcile with him despite his overtures. Julia had another child with her lover, but gave that child up to the Salvation Army. Meanwhile, John’s father essentially “kidnapped” John and moved them to another town. When Julia found them, she foolishly forced John to choose who he wanted to be with, and he chose his father (and the nightmares of his childhood reflect this experience). Upon that choice, Julia walked out on John and abandoned him. Mimi tracked down John’s father and begged him not to take John out of the country with him (he was moving for his job) and that is how Mimi came to adopt and raise John. Angry at all the lies, John storms out into the night.

After some soul-searching, John returns home to Mimi and the two lovingly embrace. John tells her he is moving out because he needs time to himself, but encourages that Mimi patch up her relationship with Julia just as he himself intends to do. He reminds Mimi that they haven’t acted like sisters in years and that there is no point in “hating people you love.” Mimi takes his advice to heart and the sisters rebuild their relationship.

John’s band continues to find success and life seems perfect for John. Unfortunately, Julia is run down by a drunk driver and killed. At the funeral, John explodes in rage and eventually punches Paul in the face (and then Paul comforts John as he breaks down in tears). Julia’s husband reveals that Julia had saved up money for John’s band to have a track recorded professionally and gives John the money at the funeral. We watch as John’s band performs in a studio for the first time, with John, Paul and George sharing the lead microphone.

Several years later, John has returned home from college. He is still in a band with Paul and George and needs Mimi to sign a permission slip for him to travel to Hamburg to perform at a concert there. Mimi asks if she is signing as his parent or guardian, and John smilingly says “both.” He and Mimi hug and she wishes him luck. John promises to call her every week he is away and walks out to head to Paul’s house to practice. Subtitles inform us that John kept his promise to Mimi, calling her every week for the rest of his life.

Trivia from Wikipedia – Following the release, McCartney commented on his depiction in the film. Referring to a scene in which Lennon punches him, McCartney stated that he was never punched out by John, “but my character is kind of cool in the film so I don’t mind being punched out. I told the film director Sam (Taylor-Wood) all of that but she said, ‘Yeah, but Paul, it’s just a film.’” 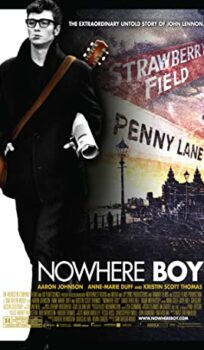