The launch of Sputnik inspires high school student Homer Hickam, Jr. (Jake Gyllenhaal) to take an interest in rocketry because he feels it is the only way out of the dying mining town of Coalwood, West Virginia.

Along with three other friends and the encouragement of his science teacher, Miss Riley (Laura Dern), the boys begin to build and test their own rockets with varying degrees of success.

Homer’s father (Chris Cooper) is not supportive of his son’s efforts, even banishing to the mine a machinist, Ike (Elya Baskin), that helps Homer weld his rockets together. After the boys are arrested on suspicion of one of their rockets starting a large forest fire and a mining accident kills Ike and injures Homer’s father, Homer goes to work in the mine to support his family and the boys stop firing their rockets.

Miss Riley gives Homer a textbook on missile design and Homer calculates that his rocket did not have enough range to start the forest fire. They find the spent rocket and their high school principal (Chris Ellis) discovers that an aeronautical flare fired from a nearby airport started the fire. With the boys vindicated, Homer returns to high school and with the help of another machinist who flew with the Red Tails, Mr. Bolden (Randy Stripling), they launch more rockets successfully and win the school science fair.

The school sends Homer to the national science fair in Indianapolis, Indiana. His display of his rocket and a deLaval rocket nozzle impresses the judges, but his display is stolen the night before the formal judging. Homer’s father ends a strike at the mine so that Mr. Bolden can machine another nozzle and rocket and ship them to Indianapolis in time for the judging..

Homer wins the science fair and receives many scholarship offers from colleges. His idol, Wernher Von Braun, congratulates him, but Homer is too distracted to notice until someone else points it out. Miss Riley is dying of Hodgkin’s disease, so the boys name their final rocket after her and successfully launch it.

The movie ends with a Space Shuttle launch and we learn that all four boys graduated college and had successful careers, with Homer eventually working for NASA. Homer’s father died of black lung, Miss Riley died of Hodgkin’s disease at the age of 31 and the Coalwood mine was shut down in 1982. 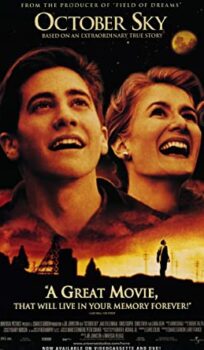