North Korean radicals attack Washington D.C. and take over the White House, demanding the U.S. withdraw from the Korean DMZ. Mike Banning (Gerard Butler) – who was removed from the president’s detail after an accident where the First Lady (Ashley Judd) was killed – gets inside, rescues the president’s son, and starts taking out terrorists while communicating with the speaker of the house (Morgan Freeman).

The lead terrorist Kang (Rick Yune), fakes his and the President’s death through crashing a helicopter everyone thought he was escaping in. Still in the bunker, he reveals his original plan wasn’t just to help N. Korea overtake S. Korea, but to detonate all of our nukes in their silos, killing millions of Americans.

Banning crashes in, and in the fight, the president (Aaron Eckhart) is shot and barely survives. Eventually, Banning kills Kang with a knife to the brain, and disarms the nuclear detonation with 3 seconds to spare.

The movie ends wit the president addressing the nation with Banning back leading his detail. 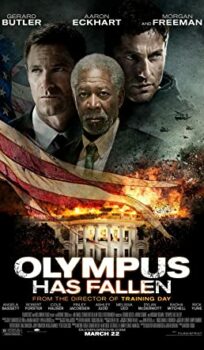