Pud is an orphan being raised by his elderly Gramps (Lionel Barrymore).  When Gramps does a good deed, he is granted a wish.  Thinking it is a joke, Gramps wishes that no one can climb down from his apple tree without his permission. This is to stop boys from stealing his apples. They learn that it is true, and no one can leave the apple tree unless Gramps grants it.  Mean old Aunt Demetria wants custody of Pud, so she can get the money that was left for him.

Death comes for Gramps, in the person of Mr Brink.  Gramps wants to live, as he worries about Pud’s fate without him. Gramps tricks Mr Brink into climbing the apple tree.  With Brink stuck in the tree, he can not take souls, and no one can die.  At first, Gramps thinks this will be good.  However, sick and injured people are stuck suffering, unable to die.  Gramps builds a tall fence around the tree, to protect innocent people from coming close where Brink could touch them.

Brink entices Pud to climb the fence.  Pud falls and is severely injured.  Pud is in agony, but can not die.  Since Pud will die with him, and not be left uncared for, Gramps frees Brink from the tree.  In the final scene, Gramps and Pud are walking up a country road to where the dead Grandma waits for them.

Note: Only those who are to die soon can see Mr Brink.  Since Pud can also see Brink, Gramps should have realized all along that Pud was destined to die soon. 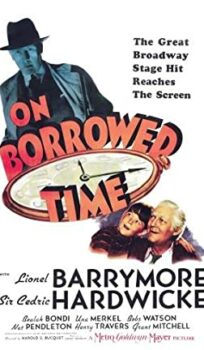