Upon hearing he has sired an heir, Nevers (Vincent Pérez) rushes back to marry Blanche and acknowledge the child. His cousin the Comte de Gonzague, who stood to inherit, kills Nevers and the entire wedding party, taking Blanche as his prisoner.

Nevers’s bodyguard Lagardère escapes with the child, Aurore, and hides her amongst a troupe of traveling players. He raises her as his own, secretly teaching her the “Nevers Attack” (an unbeatable series of steps in sword fighting that her father was famous for).

16 years later they are discovered – Lagardère confesses he is not her true father, they free Blanche, and kill Ganzague. Lagardère and Aurore declare their love and she is reinstated to her rightful title by the court. 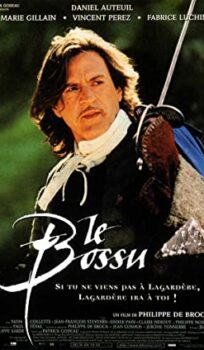