A Sergio Leone Western where Henry Fonda played a villain.

Henry Fonda is a hired gun trying to steal a strategic piece of land for the railroad.  Charles Bronson is the man with a harmonica out to find Henry Fonda for reasons unknown.   Bronson turns in an outlaw (Jason Robards) and uses the reward to buy the land and give it back to the widow (Claudia Cardinale).  Just before the big duel, we learn that long ago, Fonda hanged Bronson’s brother with a sadistic twist.  Fonda put a harmonica in Bronson’s mouth while Bronson’s brother stood on his shoulders.   Bronson finally fell and his brother hanged.  Bronson kills Fonda in a great shootout. 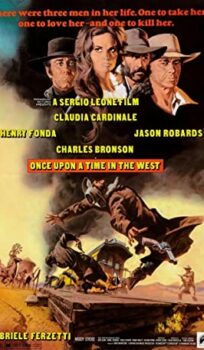