A utility worker finds seven dead bodies in an apartment, six young women and an elderly man, Mr Raymar.  There is no clear cause of death for any of them.

Elsewhere, Julie (Meg Tilly) is joining “The Sister”, a high school girls club.  For her initiation, she must spend the night in the mausoleum.

Raymar’s daughter is researching his work.  She learns that he had psychic powers, and could take the life force from living creatures, and re-animate those creatures.  The daughter learns these powers are hereditary, and only she can stop him.  She goes to the mausoleum.  Steve is trying to fight the dead, but they are too many.  Raymar’s daughter arrives and confronts her father.  They have a psychic electrical energy battle.  He is stronger than his daughter.  The daughter uses a mirror to reflect his electric psychic energy back at him, killing him.  He crumbles into dust, and all the corpses collapse. 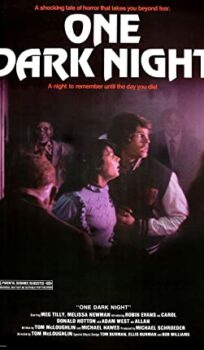