A man wakes up in the wilderness, in a pit of dead bodies. He has lost his memory. With the help of a mute Asian lady, he escapes the pit and finds a cabin with several others who do not have their memories either. The movie consists of the people trying to decide who the “bad guys” are, who killed all the people in the pit, and what’s so important about the 18th (circled on the calendar).

One by one, the group starts to regain their memories. The man in the pit was Jonah (Sharlto Copley). He was a scientist looking for a cure to a plague that killed a majority of the world’s population. Among the others were Jonah’s wife, brother and several patients that Jonah was attempting to cure. The vaccine caused total memory loss. The entire group was forced to inject themselves at once after they were attacked by the zombie-like infected.

The 18th turned out to be the day the military was showing up to pick up the cure. When the military finally arrived on the 18th, they found the compound over-run with infected people and assumed that the cure was lost. They shoot Jonah’s brother, assuming he was infected.

In the end, Jonah’s wife wrote him a note telling him that the mute Asian woman had the vaccine to the plague in her blood, so he should protect her at all costs. Jonah injected both his dying wife and himself and hid in the original pit, hoping that the military would assume they were dead and leave. He gripped the note in his hand as they passed out.

When Jonah awakes, his wife is lying dead, on top of him. Having no idea who she is, he pushes her away and the note flies off in the wind. Again, he has no memory of who he is or what he’s doing.

The Asian lady rescues Jonah again, and they are the only survivors of their group. She speaks no english and is mute, so she cannot explain to him what’s happening. She leads him to the crater full of thousands of dead, infected bodies. 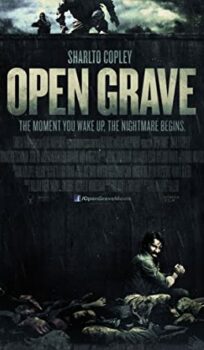