Alice and Josh (Stephen Moyer) are going through a nasty divorce and Alice is selling their house. While Alice is out jogging her real estate agent is having an open house, someone sneaks into the house and hides in the basement. Later that night Alice has a dinner party, one of the guests is Jennie (Anna Paquin), her friend. After the dinner party, everyone but Jennie leaves,  Alice falls asleep on the sofa and when she wakes up she finds Jennie in the basement, dead. The intruder, David, pops out and gives Alice a shot putting her to sleep and stuffing her into the crawl space, with a chain around her ankle.

The next day, Lila, who seems to be Davids girlfriend, shows up. She gets into the hot tub and Josh shows up looking for Alice, Lila lures him into the hot tub claiming she is house sitting for Alice. Lila has sex with him in the hot tub, In the midst of it David shows up slides a knife to Lila and she kills him, while David video tapes it.

Lila and David kill several more people. David keeps Alice in the crawl space, clearly having fallen in love with her, he tells Alice that if Lila discovers she’s alive, she will kill her. Alice makes several attempts to escape. We learn that David and Lila are actually incestuous twin serial killers, but David wants to stop and run away with Alice. Alice plays along seeing a chance to escape.

In the end Lila discovers Alice, Alice stabs her in the eye and knocks her out, the real estate agent shows up and calls the police, although the police are on the way, the real estate agent is killed by David. Alice holds a knife to Lila’s throat and threatens to kill her if Davis doesn’t let her go. David encourages Alice to kill Lila, Lila stabs Alice in the chest which angers David enough to strangle Lila, but he doesn’t kill her. Instead he helps her up and they get away just as the police are arriving to save Alice.

At the close of the movie we see Lila going to another open house.

**For those who wanted to watch the movie because Anna Paquin and Stephen Moyer are in it, you should know they are only in the movie for a few minutes. The movie was made by Anna Paquin’s brother. 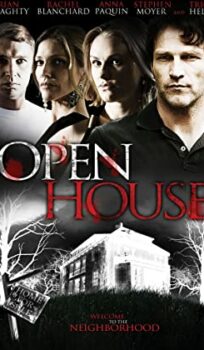