A group of friends set sail on their friend Dan’s (Erik Dane) yacht for his birthday weekend.  Amy, who is terrified of the water, wears her life jacket from the moment she steps onto the boat.  Her husband James and their baby Sara are also on board.  When a bunch of them go swimming, Amy initially stays on deck but Dan kiddingly grabs hold of her and jumps into the water. Amy immediately goes into shock and the rest of the group realizes that they forgot to put the ladder down before leaving the boat. With the sides of the boat too high, all six of them are stuck in the water with Baby Sara still on board.

Dan’s girlfriend Michelle becomes hysterical after a few hours of treading water and she drowns out of panic.  James, in trying to find a way into the boat from underneath, surfaces too quickly and hits his head.  He suffers a skull fracture and dies during the night in Amy’s arms.  Zach is accidently stabbed with a fishing knife by Dan when Zach tries to cut a hole into the side of the boat.  Zach dies from his wounds and Dan is overcome with guilt.  Zach’s girlfriend Lauren decides to swim for shore and leaves the remaining survivors. She is never heard of again and we assume she drowns.

Dan breaks the lens on his diving mask and uses it to brace himself as a human ladder so Amy can climb over him and onto the ship’s deck. It works and she makes it on board. She lowers the ladder and goes below to check on her baby who has now been alone, hungry and crying for about 15 hours.  Amy goes to check on Dan and sees that he is drowning away from the boat – by choice as he is overwhelmed with guilt over everything that has happened.  Pushing her fear of the water aside (which stems from her father dying when she was a little girl as the two were swimming together), she dives in to rescue Dan.

The next morning, a fishing troller comes by and notices what appears to be an abandoned boat but hears a baby crying. Then Amy appears, looking shell shocked, with Dan’s body laying at her feet on deck. 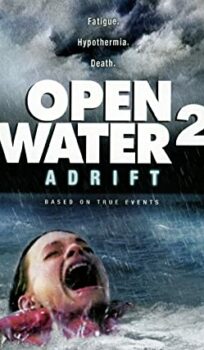