Despite their best efforts to protect him, Dima (Stellan Skarsgard) is killed in a helicopter crash, heavily implied set up by The Prince (Grigoriy Dobrygin) and his partners such as the corrupt MP Aubrey Longrigg (Jeremy Northam) to ensure the bank opens. The bank opens soon after to record profits and Longrigg is promoted to Minister of Trade of Industry.

Hector (Damian Lewis) guilt-ridden, personally ensures that Dima’s wife, children, and the two daughters of an oligarch that The Prince had murdered are given asylum in London. One day he is met by Perry (Ewan McGregor) and they reflect on the failed mission and their inability to protect Dima. Perry presents Hector with a gun Dima had asked to be given to Hector, seemingly with no message. After Perry leaves, Hector checks the chamber to find a slip of paper Dima smuggled in. On it, are the account numbers of Longrigg and other important British citizens, linking them to the Russian mafia. Hector smiles, knowing he can bring Longrigg and The Prince down. Ultimately Dima’s sacrifice was not in vain. 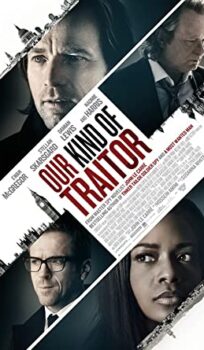