The team discovers that the U.S. Army has had a cure for the original strain for years to preserve it as a weapon of biological warfare, but not the new strain, and that they chose not to stop the virus from spreading after the two infected kids were hospitalized to keep it secret.  Casey (Kevin Spacey) gets infected by the virus when his suit tears open, although he either did not realize it or would not tell the others (presumaby the former).  Robby Keough (Rene Russo) gets infected when she tries to give Casey a shot and his thrashing causes her to stab herself with the needle.  Sam Daniels (Dustin Hoffman) and Major Salt (Cuba Gooding Jr.) steal a helicopter and become virtual fugitives to try and find the little Pygmy Marmoset carrying the virus and the cure for it.

Major General Donald McClintock (Donald Sutherland) gets a green light by the President to proceed with Operation Cleansweep, to bomb the infected town of Cedar Creek California, killing both the infected and the uninfected, to prevent the virus from spreading.  The number of virus victims grows expotentially and their bodies are burned.  Sam and Major Salt recover the little monkey and narrowly escape McClintock’s two helicopters, trying to chase them down and bring them back to Travis Air Force Base.  Meanwhile Brigadier General Billy Ford (Morgan Freeman) decides to go against McClintock’s plan and calls off the bomber to buy Sam some time.

Sam and Major Salt get back to Cedar Creek to find it mostly deserted of military personnel, but Robby and the other infected are still in the hospital.  Casey has died, but Robby has not gone into convulsions from the virus yet.  Sam takes off his helmet in Robby’s room to keep her with him, thus becoming infected.  Major Salt finishes developing the serum and administers it to both Robby and Sam.  Sam joyfully tells Major Salt that Robby’s temperature is going back to normal, but Major Salt gives him the bad news that McClintock has resent the bomber to proceed with Operation Cleansweep.

Sam and Major Salt get into their stolen chopper and confront the bomber, trying to convince the two young pilots to abort the mission while McClintock gives them orders to ignore them and Ford gives Sam an inventive way to stall the bombers.  Ultimately the bombers drop the bomb into the water, saving Cedar Creek.  McClintock is furious and orders the bombers to report back to base, but Ford tells the bombers to ignore the order and places McClintock under arrest for the crime of withholding vital information from the President.

Sam goes back to the hospital to find the serum administered to the infected and Robby back to normal.  At the end of the movie it is implied that Sam and Robby, who were recently divorced, got back together. 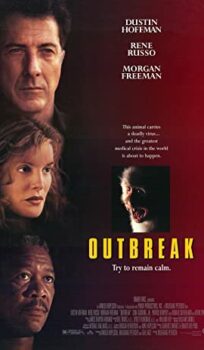