Mark Sheppard (Peter Boyle) is the boss of the titanium mine on Jupiter’s moon, Io. For the past year, Sheppard has been allowing the distribution of an amphetamine which boosts the workers productivity, but eventually causes the miners to do psychotic things, like beating up hookers, ripping open their own spacesuits while on Io’s surface or going into airlocks in their pajamas.

New Federal Marshal William T. O’Niel (Sean Connery) takes a blood sample from one of the dead miners and with the help of grouchy Dr. Lazarus (the irrepressible Frances Sternhagen) discovers the presence of the drug in the miner’s system. He also discovers that his partner Sgt. Montone (James B. Sikking) is in cahoots with Sheppard. Sheppard is paying Montone to look the other way.

O’Niel decides to bring down Sheppard, but in the process, Montone is murdered and Sheppard sends for two of the dumbest assassins in motion picture history on a shuttle to the mining colony to kill O’Niel. One assassin never took a high school physics class, since he shoots a rifle in a glass-enclosed greenhouse and is subsequently sucked out into space. The other allows himself to be sealed into a corridor while O’Niel depressurizes it from the outside by loosing one of the joints that holds the structure together.

The real highlight of the movie comes when Sgt. Ballard (Clarke Peters), Sheppard’s “inside man” on the police force, fights with O’Niel on the solar panels outside the colony. O’Niel disconnects the air hose from Ballard’s helmet, killing him. Then, O’Niel tracks down Sheppard at the mine’s bar and punches him out in front of the crowd.

O’Niel takes the next Shuttle back to Earth to join his wife and son (who both had left him at the start of the film). Dr. Lazarus, who stays on Io to watch it “hit the fan around here”, says goodbye to O’Niel and tells him “You done good”. 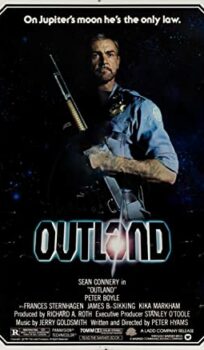