Joanna (Goldie Hawn) and her husband Grant Stayton III (Edward Heremann) have docked their expensive yacht in Elk Cove, OR where spoiled Joanna sends for a carpenter, Dean Profit, to update her closet. When Dean completes the new oak closet Joanna refuses to pay him since “Everyone knows closets are made of cedar.” A disagreement follows ending with Dean and his toolbox in the sea.

Later that night the Stayton’s are out to sea and Joanna realizes she has left her wedding ring on deck. She goes up to get it and choppy water causes her to fall into the cold sea. She is saved by a fisherman but cannot remember who she is. The news makes local TV. Dean sees the interview and goes to the mental hospital to retrieve her as his wife, “Annie”. Grant was there earlier but left her there. Dean’s plan is to take her home and have her work until she has repaid him for the job she stiffed him on and his toolbox. (Note: Dean is a widower) Slowly, the trashed house comes together, the unruly boys turn into good kids and life is fun and good for the “family.”

Dean tries twice to tell Joanna who she really is but chickens out the first time and the second she does not believe him. All of this time, Joanna’s mother is trying to contact her. Finally, mother threatens Grant to produce her daughter or else.

Dean and his best friend, Billy Pratt (Michael Hagerty) are at the grand opening of their miniature golf course. The event is a success. Life is good. The family returns home where Grant is waiting for Joanna. As soon as she sees Grant her memory returns. She remembers who Dean is and understands why he brought her to his home. She leaves with Grant.

Back on the yacht she realizes she wants to return to Dean and that Grant left her in the mental hospital. At the same time Dean and the boys get a ride on a Coast Guard ship to bring her back. The Coast Guard gets a call and has to break pursuit. Dean jumps over board after yelling “Katarina!” Joanna jumps overboard after yelling “Arturo.” (Referenced earlier in the movie to two lovers and why the ships sound their horns three times). The Coast Guard saves both. Dean is shocked when he learns all of the wealth is Joanna’s and asks what can he give her that she doesn’t already have. She replies “A little girl.” The two kiss as the four boys write up their Christmas lists. 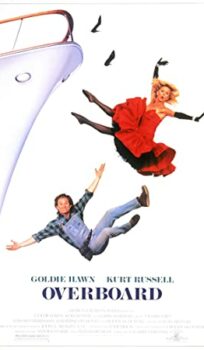