After spending a long Christmas Eve working at her office, and before she can go home to a family Christmas party, Angela Bridges (Rachel Nichols) finds her car won’t start, and that her cell phone doesn’t get reception in the building’s underground parking deck she is in.

A kind and helpful security guard, Thomas (Wes Bentley), shows up and tries to fix her car, and when this is unsuccessful, calls her a cab. When Angela tries to leave the building, she finds the front door locked, and refusing to wait, the cab driver shrugs and leaves. When Angela goes back to the parking deck to tell Thomas what has happened, all the lights are shut off, the doors are chained shut, and the once-sweet Thomas knocks out and abducts Angela.

Angela discovers that the deranged Thomas has been stalking her for three years, and believes that they are “meant to be”. As a “Christmas present”, Tom murders Bob, a fellow employee of Angela that sexually harassed her in the beginning of the film, and Karl, another of the building’s security guards that Thomas feels got “too close” to Angela over the years.

Angela escapes, and after evading him, trying to call for help, escaping a water-filled elevator (Tom uses a fire hose for this), and killing Thomas’ attack dog, Rocky, a brief car chase ensues. Angela wrecks, and when Tom gets out of his car to help, Angela stabs him in the eye with a nail file and handcuffs him to the car door as gasoline from the wreck spills all over the parking lot. Angela is only ready to walk away, but when Thomas curses at her, Angela decides she has had enough and, wishing Tom a “Merry Christmas!”, sets the gasoline on fire with a stun gun, leaving him to burn in the car.

Using Thomas’ keys, Angela finally escapes the parking deck and runs into the fire department just as they are responding to the alarm. 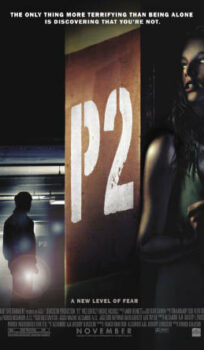