Ben (Lee Marvin) and Pardner (Clint Eastwood) are partners in the California gold rush. Ben is a hard drinking low down scoundrel. Pardner is naive and trusting, and only wants enough money to buy a farm and settle down. Their boom town has no women.

A mormon travels through with two wives. The miners think it is unfair that he has two wives, and they have none. They persuade him to sell one wife, and Elizabeth, the younger wife, agrees to this. Ben buys her.

With many miners and one woman, tension builds in town. Ben convinces the others to kidnap 6 dance hall girls from Sonora. Dance girls lead to a saloon, gambling and liquor. Soon the mining camp is a boom town.

Elizabeth falls in love with Pardner. Since the mormon had two wives, she convinces Ben and Pardner that she can have two husbands. However, as the town grows, respectable people move in. Elizabeth wants to look proper, so she throws out Ben, and then later throws out Pardner.

The gold vein has run out. Pardner and his crew begin to tunnel under the streets and buildings to get the last remnants of gold dust. Suddenly, the tunnels begin to rapidly collapse. The town is swallowed into the ground.

Ben leaves to look for gold elsewhere. Pardner stays with Elizabeth to try his hand at farming there. 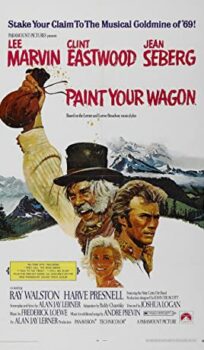