Long summary:
She accomplishes task 1 successfully but makes an error in Task 2. The stepfather finds out about the Doctor’s betrayal and kills him. Ofelia’s mother dies in childbirth. The Stepfather finds out about the housekeeper’s betrayal, but she manages to escape to the guerillas. The faun returns for a last chance and she takes her baby brother to the center of the labyrinth as her stepfather follows. (he’s been drugged by some opium/ morphine). When asked to sacrifice the baby so she can open the door to the underworld kingdom, she refuses and the faun leaves. He father finds her, takes back the baby and shoots her in the stomach. Upon leaving the labyrinth he sees the guerillas surrounding him ans he hands over the baby to the housekeeper. He requests that they tell his son later… but she cuts him off saying the child will not even carry his name. Her brother shoots him and they head into the labyrinth to find Ofelia. She is slowly dying and the housekeeper takes her in her arms and hums a lullaby as Ofelia drifts off… She is “transported” to the throneroom where the king/ father says that choosing to spill her own blood over the blood of an innocent (babay brother) was the right solution to the last task. She is then welcomed by the faun and invited to sit next to her mother and father. Narrator ends saying that the princess reigned wisely for many years, and there are still signs of her passing in the moral realm if one knows where to look.

NOTE: This is the french version so there might be slight changes in dialogue. 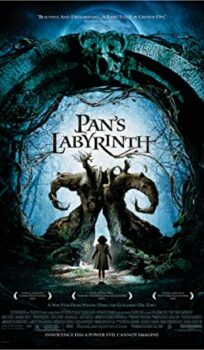