The oblivious Parks hold a party the next day. Geun-se escapes and attacks the Kims at the party, injuring Ki-woo and killing Ki-Jung, and Chung-sook kills him. During the commotion, Ki-taek snaps and kills Mr. Park when Mr. Park recoils from his smell. Ki-taek escapes. Moon-gwang’s body in the secret room is not found.

After recovering from his injuries, Ki-woo and Chung-sook are sentenced to probation. Ki-woo discovers that Ki-taek is hiding in the secret basement room of the Park home (the Parks themselves having sold it to new owners.) Ki-woo communicates to him that one day he’ll earn enough money to buy the home so his father can live freely, but this is just a fantasy. 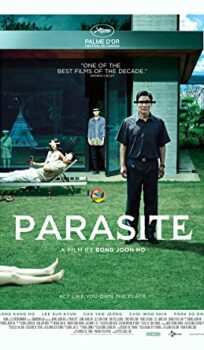