18 shorts dealing with love and relationship stories in 18 different neighborhoods of Paris, each done by a different director with different actors.  These are not in order…

Tuileries
The tourist (Steve Buscemi) sits in a subway station reading a guide to Paris and watches a couple across from him make out.  When the couple notices him, the man becomes aggressive.  The girl leaves him and comes over to the Tourist and begins to make out with him instead.  The boyfriend comes over and beats up the Tourist.  The couple leaves together laughing.

Quais de Seine
Two teenage boys yell out rude comments to passing women while their friend sits in embarrassed silence beside them.  He notices a pretty girl in a hijab watching them.  When she leaves, he follows and they strike up a conversation.  He follows her to her mosque and when she leaves with her father, the father invites him along with them.

Place des Victoires
A couple’s young son had died and his mother (Juliette Binoche) is unable to let him go.  She dreams of a cowboy (Willem Dafoe) who takes her to her son where she is able to say goodbye.

Faubourg Saint-Denis
A young blind man gets a call from his actress girlfriend (Natalie Portman) breaking up with him.  He relives their relationship from its start to its disintegration.  She calls back and he realizes that she was merely reading him a part from a script for practice, but he is aware now that they have drifted apart and is prepared to fix their relationship.

Pigalle
A man (Bob Hoskins) goes to a peep show and strikes up a conversation with a woman there.  It turns out that this is a kind of role-playing game they go through.  They are old acting companions.

Montmartre
A frustrated man, desperate to date someone, finally finds a parking spot only to have a woman collapse next to his car from low blood sugar.  He puts her into his car so she can rest and they strike up a conversation and make plans for a date.

Le Marais
Gaspard strikes up a conversation, flirting with the silent man he meets in a studio.   The man does not respond much, but Gaspard is undeterred and leaves his phone number with him.  It turns out the young man does not speak French and so has not understood what was being said.  Upon realizing he was given Gaspard’s phone number, he chases after Gaspard.

Bastille
A man waits at a café to tell his wife (Miranda Richardson) he wants a divorce.  She arrives and informs him she has terminal leukemia.  He narrates the last months of her life as he falls back in love with her, relearning her every quirk and experiencing it for the last time.

Tour Eiffel
A mime wakes up and wanders about the city.  He meets a female mime and its love at first sight.  We see their son, experiencing the city through his parent’s fantastical eyes.

Porte de Choisy
An old hair-product salesman goes to an Asian beauty shop and becomes involved in a surreal, musical romance with the woman running it.

Père-Lachaise
A soon to be married couple (Emily Mortimer and Rufus Sewell) wander about Paris’ famous graveyard on their early honeymoon.  The woman complains that her fiancée has no sense of humor and panicking, breaks off their engagement.  He runs into the ghost of Oscar Wilde who gives him some good lines to win her back with, which he does.

Parc Monceau
An incomprehensible Nick Nolte talks with a young woman and it sounds like they are contemplating an affair.  In the end it turns out that he is her father and she is agreeing to let him babysit her newborn son while she takes a night off for the first time.

Quartier des Enfants Rouges
A young actress (Maggie Gyllenhaal) has a connection with the young man who brings her drugs.  They exchange numbers but when she calls him later, someone else comes to deliver her drugs.

Place des fêtes
A heartbreaking segment in which an immigrant, dying from an attack by gang members, lays in the arms of the paramedic he had serenaded earlier.

Quartier de la Madeleine
A young man (Elijah Wood) meets a vampire who does not kill him, though she contemplates it.  He trips and falls and as he is dying, she bites him and makes him a vampire as well.

Quartier Latin
An elder couple reunites as they prepare to divorce.  He is marrying a younger woman, she (Gena Rowlands) claims she is seeing a much younger cyclist.  They reminisce and trade barbs before departing for the night.

14e arrondissement
An American woman in her forties narrates her short trip to Paris in her halting, classroom-learned French.   What starts out slightly mocking turns touching as she discovers herself in Paris.

Loin du 16e
A young woman commutes forever in order to drop off her small child in a soulless daycare.  She sings a lullaby before going.  After yet more commuting she arrives at the sterile, rich house where she works as a nanny.  Her boss, before going, asks if she wouldn’t mind staying late tonight.  The woman goes in to see the crying baby she is looking after, singing the same lullaby to it while she looks out the window, thinking of her own child. 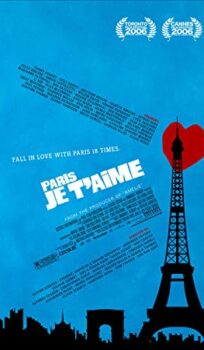