Jim (Chris Pratt) is one of 5000 passengers on a cruise-ship like vessel carring them to a new civilization. The trip takes 120 years, so they are all in hibernation pods.

Jim’s pod malfunctions and he is awoken after only 30 years, with no way of going back to hibernation. His only companion is Arthur (Michael Sheen), a robotic bartender.

After a year, and due to lonelyness, Jim wakes up another passenger, Aurora (Jennifer Lawrence), telling her that her pod must have malfuncioned as well. The two become close and live as a couple.

Another year passes and Arthur lets it slip that Jim actually woke Aurora up…she freaks and won’t speak to him any longer. The tension is enormous.

Meanwhile, the ship is having minor issues that are slowly becoming larger. Another pod malfunctions and awakens one of the ship’s officers (Laurence Fishburne). He is sick but discovers what is wrong with the ship and lets Jim know what he needs to do. The officer dies and Jim, together with Aurora save the ship in a dramatic space-walk rescue. The two of them become close again. Jim discovers that he can use the ship’s medi-pod to go back to hibernation, but only one person can do it. He wants Aurora to go back to sleep.

Time passes and we see Jim back at the bar talking to Arthur. Aurora enters and we discover that she never did it.

Cut to about 90 years later and the crew and passengers are waking from their 120 year journey. The main lobby is now a forest that began with a tree that Jim planted. We hear through Aurora’s voice-over, a reading of a letter to the crew, explaining everything that went on while the rest of the ship slept.

It appears that Jim and Aurora lived out the remainder of their lives in paradise. 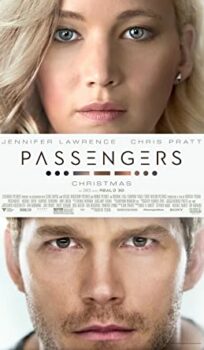