Ghost (Karl Urban) is left behind as a child when a Viking raiding party attacks a Native American settlement (where is never exactly clear).  He is raised by the tribe, but learns how to use the sword he was found with anyway.  When another Viking raiding party comes along 15 years later, Ghost manages to kill off all of them.  Along the way the Pathfinder (Russell Means) is killed, along with what looked to be all of the male population of their tribes (though this is never specified).  Ghost returns to the village and names the Pathfinder’s daughter (and his spirited loved interest) the successor as the leader of their people – the new Pathfinder.  They have many children and he spends his days patrolling the borders, watching for more Viking ships. 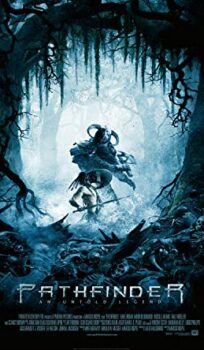