In World War I, the French and German troops have been lined up in trenches facing each other, with neither side able to advance.  General Moreau learns that if his men capture a hill facing them, he will get a big promotion.  It is a suicide mission, with virtually no chance of success.  He orders the attack.  The men are pinned down by such heavy German machine gun fire, that many of them never leave the trenches.  When he sees this, Moreau orders his own artillery to fire on the French soldiers in the trenches.  The artillery officer refuses to do it.

Moreau wants to court martial and execute some men, as an example to other French soldiers.  Moreau instructs Colonel Dax (Kirk Douglas), who is under Moreau, to choose who will be executed.  Dax responds by offering himself, rather than choosing men who are innocent.  Moreau ignores Dax, and select a man from each of the 3 divisions to be court martialed.  Dax requests permission to defend the 3 men in the trial.

The trial is a farce.  The judges are selected by Moreau.  Dax is not allowed to present evidence or call witnesses.  Every time Dax tries to speak, the prosecuter objects and the judges always side against Dax.  The 3 are sentenced to be executed.  To try to save them, Dax goes above Moreau to General Broulard.   Dax has witness accounts that Moreau ordered the artillery to fire on his own troops, and will go to the press with this.  Broulard is indifferent and does nothing.  The 3 are killed by a firing squad.

After the execution, Broulard meets with Moreau and Dax.  He tells Moreau that because of the order to fire on his own troops, Moreau will also be court martialed.  Dax is offered promotion to Moreau’s old post.  Broulard states that Dax was clever and manipulated the whole thing well.  Broulard believes Dax cared nothing about the soldiers and that it was all a scheme to get Moreau’s post.  Dax tells Broulard what he can do with his promotion and walks out. 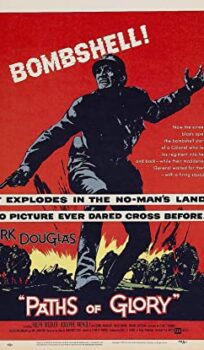