Penelope is born with a pig’s snout because of a curse placed on her family by a witch. Her parents are told the only way to break it is for someone of her kind to marry her. Her mother assumes this means a blue blood and Penelope is hounded by her mother and a dating service.

After escaping the house and finally being accepted by the public with her pig nose and all, she accepts a marriage proposal from the very man who tried to sell her story to a gossip paper. When it’s time to say I do Penelope says no and hides in her room and tells her mother that she likes herself the way that she is – and that is what breaks the curse.

Penelope ends up marrying the man named ‘Max’ who actually loved her before her nose was fixed.

Also, the butler turns out to be the witch who cursed the family. Before walking away he puts a curse on the mother to make her silent for a while. 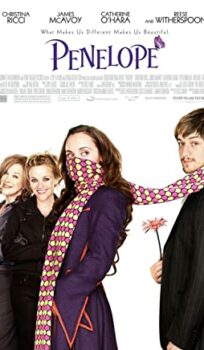