Arthur (Steve Martin) makes a mess of his own life and everyone else’s. He impregnates innocent schoolteacher Eileen (Bernadette Peters), then abandons her. She is forced to seek an abortion, and takes up a life of prostitution.  Later, Arthur spends his wife’s inheritance to open a record store. The store is unsuccessful, and all the money is lost.

Arthur meets Eileen (who is now going by the name Lulu) again. He leaves his store and his wife, and moves in with her.

A blind girl Arthur once complimented is raped and murdered by the accordion playing tramp (Vernel Bagneris) Arthur had once bought a meal for. Circumstantial evidence points to Arthur, who is arrested and convicted, then sentenced to death.

To the very end, Arthur is delusional, still seeing the world through the rose-colored glasses of Tin Pan Alley songs. At the gallows, he sings the words to “Pennies From Heaven.” Before he is hanged, he has a vision of a happy ending in which he and Eileen live happily ever after, after singing “The Glory of Love” together in a big Busby Berkeley style musical  number. 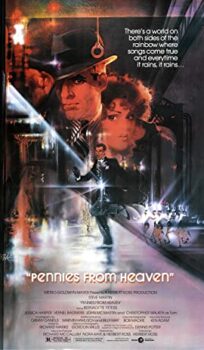