Pooper:
The real killer is Rumi, who believes herself to be the real Mima. Rumi was working with Mr. Me-Mania. Rumi unsuccessfully tries to kill Mima and is later committed to an asylum. Mima goes on to become a successful actress.

Long Ending:
Mima (voiced by Junko Iwao) is the lead pop singer in a trio. Her agency head Tadokoro (Shinpachi Tsuji) believes she has star potential and convinces Mima to leave the group and work at becoming an actress. Her manager Rumi (Rica Matsumoto) is concerned that Mima is making the wrong choice and, in general, is very overprotective of Mima.

Things do not start well. Her pop trio (now a duo) actually starts becoming more successful without her. Mima is only given a very small role in a popular TV show. She finds a website online called “Mima’s Room” that is not written by her, but contains many details and photos of her private life. Since leaving her band, she has been receiving threatening mail. Eventually, the screenwriter of the show (who is dismissive of Mima’s attempt at a career transition) writes a scene for her character to be raped. Mima agrees to do it. The scene is very lurid, causing Rumi to run off-set crying and Mima to suffer some psychological trauma. Her issues are exacerbated after she agrees to do a nude photo shoot for additional promotion.

Mima’s grasp on reality begins to loosen. She experiences memory and time lapses and keeps seeing a threatening man following her who may or may not be real. Most troubling, she seemingly hallucinates an alternate version of herself who claims to be the “real Mima” and says that she wants to remain a virtuous pop star and will kill Mima for destroying the “real Mima.”

People who have slighted the “real Mima,” such as the screenwriter of the rape scene and photographer of the nude photo shoot end up brutally murdered. Mima starts suspecting that she is the killer. Nonetheless, she persists in her pursuit to become an actress despite her psychosis growing ever worse. The TV studio begins embracing her and gives her a larger role. Mima also suspects she is committing murders during her time and memory lapses.

After the show finishes shooting, Mima is left alone on the studio lot. She sees the threatening man and believes him to be an illusion. Instead, he attacks and tries to rape her on the same set she shot the rape scene. He claims to be her biggest fan, named Mr. Me-Mania, and says the “real Mima” has been emailing him every day. Mima struggles and manages to kill Mr. Me-Mania before he can rape or kill her. She eventually finds Rumi and the pair return to set, but find no body (suggesting Mr. Me-Mania was in fact a hallucination). Mima faints into Rumi’s arms.

When Mima awakens, she thinks she is home. She soon realizes, however, that the room she is in is actually just designed to mirror her room from when she was a pop star. Rumi then walks in dressed in clothing similar to that worn by Mima when she was a pop idol. Rumi believes herself to be the “real Mima.” Rumi was emailing/working with Mr. Me-Mania, ran the Mima’s Room website, and killed all the murder victims for ruining “her” reputation. It is revealed that Rumi also killed Tadokoro and hid Mr. Me-Mania’s body when she found Mima on-set. The “real Mima” then says she will murder Mima and accuses her of being the imposter (Mima was apparently suffering a shared psychosis, called Folie a deux, and also hallucinates Rumi as the “Real Mima”).

Mima manages to escape the apartment and Rumi pursues her. During the chase, Rumi stumbles into the road and mistakes truck headlights for spotlights and refuses to move out of the road. Before the truck hits Rumi, Mima pushes her out of the way. The truck drivers call the police and ambulance and Mima has definitively proven to herself she is not a killer.

The movie jumps ahead in time. Mima is visiting Rumi, who is committed in an asylum. It is revealed that Mima has become a successful actress, and says she couldn’t have done it without Rumi’s “help.” Mima walks to her car, smiles into the mirror, and says that she knows that she is indeed the “real” Mima. 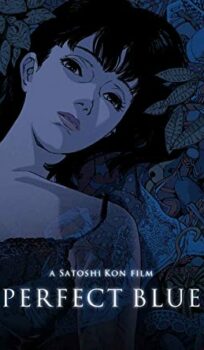