Stricken with grief, Louis Creed (Dale Midkiff) exhumes his dead son Gage (Miko Hughes) from his gravesite and buries him in the Micmac burial ground. Gage comes back evil like the family cat Church, killing Jud (Fred Gwynne) and then his own mother Rachel (Denise Crosby), but not before Rachel realizes that her dead sister Zelda (Andrew Hubatsek) had come back through Gage to get revenge for leaving her to die from her spinal meningitis years back when Rachel was still a child (though Rachel wasn’t really the one to blame, as her parents left her alone with Zelda the night she died).

Louis finds out about the deaths, and then kills Church and then, after a hard struggle, Gage, at Jud’s house with needles filled with poison. He sets Jud’s house on fire, and then takes Rachel’s body to the Micmac burial ground, despite protests from Pascow (Brad Greenquist) and having not learned a thing from what had just happened.

Rachel returns home in the evening, and she kills Louis as the screen goes black. 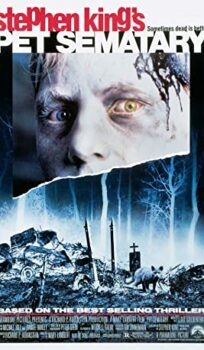