Pooper:
Seth submits to Holly’s will and frees her from her cage. She slits his throat after declaring her love for him. We learn that Holly kept Seth alive, living in her former cage, where she mutilates him to satiate her homicidal impulses (and he gets her love in return). Having an outlet for her murderous desires, Holly is able to live a normal life.

Long Ending:
Seth (Dominic Monaghan) is an assistant at a dog shelter that takes in and eventually euthanizes strays. He has very little purpose in life. One day, he sees an old classmate named Holly (Ksenia Solo) and becomes obsessed with her. He makes numerous attempts to ask her out, each being more disastrous than the last. Holly complains about Seth’s advances, as well as her ex-fiancee Eric’s infidelity, to her roommate Claire (Jennette McCurdy). Eventually, Eric beats Seth up after for approaching Holly at a bar. As Seth leaves the bar, he finds Holly’s diary dropped on the ground and takes it with him.

After reading Holly’s journal, Seth begins covertly following her. He eventually builds a cage in the basement of his workplace, drugs and kidnaps Holly, and imprisons her in the cage. When Holly awakens, she screams to be released. Seth responds that nobody can hear her and that he has captured her in order to save her.

In a mid-movie twist, it turns out that Holly is a serial killer. Seth learned of her double life after reading her journal. It turns out that Claire was Holly’s first victim (and the Claire we have seen throughout the movie was just Holly’s hallucination). Some time ago, Holly learned that Claire and Eric had been having an affair. While Holly was confronting Claire in her car, the car got into a crash. Taking the opportunity to cover up her crime due to the crash, Holly stabbed Claire to death with a shard of winshield. Holly discovered that she loved murdering Claire so much that she couldn’t help but continue to kill (mainly killing homeless people). The real reason Holly left Eric was that she was worried she would eventually kill him. Seth vows to “save her” by curing Holly of her homicidal tendencies, and if he can’t, to leave her to die in the cage.

As the two interact, the power dynamic begins shifting. Holly claims that Seth is really “like her” and that with him, she may have found true love. Things reach a tipping point when the shelter’s security guard finds Holly’s cage. She distracts the guard so that Seth can sneak up and kill him. She then talks Seth through the process of disposing of the guard’s body (he feeds some to the dogs, cuts up the res and incinerates it in the oven the facility uses to incinerate euthanized pets). Once Seth is finished disposing the body, Holly tells him to admit he is a killer. He denies this and Holly begins going on a hunger strike, saying that Seth’s rejection of her true self (the killer) will leave her alone in the world. She states that the only way he can prove his love for her is to give her one of his fingers (i.e., if he is willing to sacrifice a piece of himself, it shows he has embraced her darkness).

The police identify Seth as a suspect in the disappearance of the security guard (and due to his spending time with Holly, he is about to be fired anyways for slacking off at his job). Knowing that he must either release Holly or leaver her to die in the basement, he has an internal struggle. Seth then runs down to the basement and cuts off his finger for Holly. She convinces Seth to release her from the cage. She declares her true love for Seth, they make out, and then Holly slits Seth’s throat.

Jumping to the future, we find that Holly is back in a relationship with Eric. Holly looks at Eric’s phone and sees a text showing that Eric is once again being unfaithful. Holly considers killing Eric, but leaves the apartment instead. She goes to an abandoned warehouse where we find that she is keeping a heavily mutilated Seth in her former cage (apparently, she sewed up his slit throat and kept him alive). Holly explains that because Seth allows her to mutilate him, she is able to live a normal life and not kill people. She says that Seth indeed saved her as he promised to do (i.e., let her have a normal/non-murderous life) through his sacrifice (allowing her to exercise her homicidal urges on him). The two hold hands as Holly once again says she loves Seth (who seems to reciprocate her love). 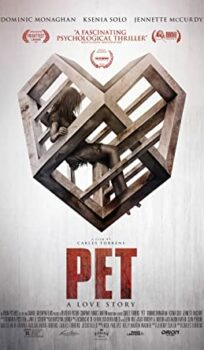