Selena Cross (Hope Lange) is raped by her alcoholic step-father (Arthur Kennedy). After he chases her and she falls down a hill, she has a miscarriage which the local doctor covers up. The doctor (Lloyd Nolan) forces a written confession from the step-father, and tells him to leave town and he’ll keep the confession secret.

Meanwhile, Allison Mackenzie (Diane Varsi) is caught skinny dipping with a boy. When her mother (Lana Turner) finds out, they fight. The mother reveals that she was never married and Allison is a bastard. Allison runs into her bedroom only to find that Selena’s mother, who is the housekeeper, has hung herself in the closet.

Allison runs away to NYC, telling her mother that she’s going to become a “kept woman” just like her mother.

Pearl Harbor happens. The alcoholic step-father, who is now in the Navy, returns on shore leave, tries to rape Selena again, and she kills him.

Allison returns for the trial during which the doctor reveals the dead step-father’s confession. Selena is found not guilty. Allison reconciles with her mother. 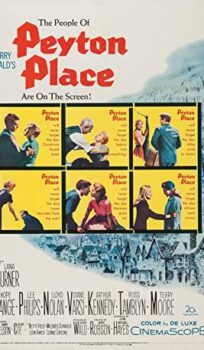