In London during the 1950’s, Reynolds Woodcock (Daniel Day-Lewis) is a renowned fashion designer who makes dresses for wealthy clients, but he is distant from others apart from his sister Cyril. He meets and falls in love with a waitress named Alma (Vicky Krieps), who becomes his muse and lover. However, he begins to treat her the same way he treats everyone else.

Alma gets fed up with Reynolds’ emotionally abusive behavior and she feeds him bits of a poison mushroom. He falls ill and she takes care of him. After he gets better, Reynolds proposes to Alma and they get married, but he goes back to the way he was. Alma makes him eat another meal with the poison mushrooms, but she tells him about it this time and promises to care for him when he inevitably gets sick.

Knowing she will take care of him, Reynolds resumes his love for Alma. They later have a child and she helps him in his work.

Moviepooper adds:
Reynolds had a difficult time expressing love, both giving and receiving.
“Love” was only possible while he was sick.
The poisoning was a desperate means to that end. 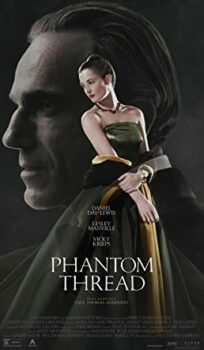