POOPER:
Bruni and his men plan on launching a nuclear missile at the American Fleet and starting WWIII, possibly on the orders of Commander Markov. Captain Zubov and his men successfully deactivate the missile before it can be launched.  Their sub is sunk by another Soviet sub, with XO Kozlov as the only survivor.  The remaining crew are now ghosts.

LONG VERSION
Set in the mid-1980’s, Soviet Naval Captain Dmitri Zubov (Ed Harris) and his submarine crew are ordered to sea to help test a new piece of equipment by his CO, Vladimir Markov (Lance Henriksen).  Before they are to depart, they are joined on board by several KGB technicians, led by Agent Bruni (David Duchovny).  As the sub pulls away from port, Commander Markov commits suicide.  Once they are out at sea, their orders are revealed.  They are to approach the American Fleet in the Pacific and test the new equipment, which is called the Phantom.  The Phantom is a device that can record the propeller sounds of any vessel and rebroadcast them so that any submarine will think it is following something other than a Soviet sub.  Early in the mission, the sub follows a tanker ship.  When the sub later engages an American sub, the Phantom is turned on, and the American sub goes away, thinking it’s just a tanker.

With everyone excited that the test is a success, Captain Zubov is worried.  He believes that the Phantom could be used to mimic any vessel while the sub launches it’s missiles.  He relays this belief to his XO Alex Kozlov (William Fichtner) and the other officers.  His worries are confirmed when Bruni refuses to allow Zubov to surface and confirm their orders.  At that time the other KGB technicians pull out their guns and take over control of the submarine.  Bruni then tells the crew that Zubov is a drug-addicted drunkard who killed his own men and had it covered up.  Locked up with his officers and other loyal crewmen, Zubov explains what he was talking about.

Early in his career, Zubov was involved in a war-game exercise with another sub.  The two ships collided, which caused the deaths of 6 crewmen and gave Zubov a brain trauma.  He takes pills for the brain injury, and drinks to swallow the guilt over the deaths.  Because Zubov’s father is a big-wig in the Soviet Navy, Zubov and the other sub captain are reassigned to a far away port to finish their careers.  The other sub captain was Commander Markov.  Zubov figures out that their boat was specifically chosen for this mission, and he believes it’s to start WWIII.  Since Markov killed himself at the beginning of the mission, he must be the one who suggested Zubov’s boat to Bruni, and probably killed himself in case the mission failed.

Zubov then orders his men to the missile bay to disarm the nuke, while they figure out a way to take back control of the sub.  They are able to get a message out to another Soviet sub, who then promptly attacks the ship.  Zubov takes back control of the ship when Bruni realizes he cannot outmaneuver another sub, and Zubov is able to use his torpedoes to temporarily disable the other sub.  Bruni then sees that the missile is being tampered with, so he orders the Phantom turned on and goes to launch the missile.  Bruni had mentioned earlier that some older Soviet subs, like the one they are currently on, are being sold to the Chinese.  With the Phantom engaged, the Americans will think that they will have been just nuked by the Chinese and will retaliate.  With the other sub recovered and shooting at them again, the missile is launched, but it was already deactivated and won’t detonate.  The other sub cripples Zubov’s sub, and the boat sinks to the bottom.

With little chance for survival, Zubov orders Kozlov to get in the egress suit and go to the surface to tell everyone that it was a madman and not a rogue crew that tried to launch the nuke.  As they lay dying, Bruni tells Zubov that he was chosen because Bruni was a boatswain on the sub that Zubov crashed, and Bruni didn’t have an influential father to save his career.  Later, the sub is rescued and hauled back to port, with the crew still alive.  Back at port, and with the men now on deck, they see Kozlov saluting them, but they also see other sailors removing body bags from the sub.  They then realize that none of them survived and they are now ghosts.  The movie ends with title cards revealing that in 1968, a Soviet sub disappeared in the Pacific, and it was apparent that a disarmed nuclear missile was fired from it.  All other information was classified by both the Soviets and the Americans. 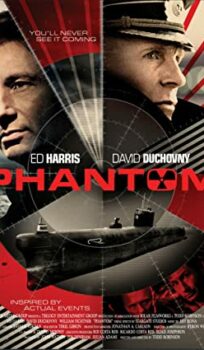