Long Ending:
Older sister Jennifer Pailey (Joanna Going) has picked up her younger sister Lisa (Rose McGowan) to spend the summer with her in her small town of Snowfield, Colorado. When they arrive at Jennifer’s home, they find Jennifer’s house keeper dead and partially dissolved. The girls try to call for help, but the phone lines are down and their car no longer works. They walk to downtown and find that most of the people are missing, partially dissolved, or horribly maimed (they find the local pie-maker’s head in the pie oven). They note that before he died, the local police officer shot an entire clip at something.

Soon, Sheriff Bryce Hammond (Ben Affleck) and his two deputies Stu Wargle (Liev Schreiber) and Steve Shanning (Nicky Katt) drive in to town to respond to the police officer’s earlier call for assistance. They find the girls and continue to investigate, finding more bodies. While searching a hotel, they find the message “Dr. Timothy Flyte, The Ancient Enemy” written in lipstick on a bathroom mirror. They radio a dispatcher for help and tell them to look up Dr. Flyte when the radio mysteriously shorts out. They continue to search through the town during which they hear ghostly shrieking, see spooky visions, and the electricity cuts in and out at random. Eventually, Deputy Shanning is attacked and carried off by a flying creature.

The group barricades themselves into the local police station to wait for help. Sheriff Hammond notes that there is a nearby military science base that the dispatcher will likely notify to send help. Suddenly, a large moth-like creature breaks in and attacks and kills Deputy Warren, dissolving his face in the process. Though Hammond and the girls shoot it many times, the bullets have no effect. Meanwhile, several FBI agents locate Dr. Timothy Flyte (Peter O’Toole), who is a publisher of a cheesy tabloid magazine. They force Dr. Flyte to come with them to the military science base nearby the town.

While waiting for help, Sheriff Hammond tells Jennifer how his confidence has been shaken after he accidently shot and killed an innocent child during a police raid. Meanwhile, Lisa theorizes that they are facing the Devil himself. Eventually, a military contingent from the nearby military base arrives, replete with soldiers, scientists, Dr. Flyte and a mobile science lab stored in a tank. The soldiers and scientists begin searching the town after Hammond and the women are escortted into the tank. Soon, the creature attacks and kills all of the soldiers and scientists but Dr. Flyte. Speaking through the dead scientists, the creature explains that it is the “Ancient Enemy” he once wrote about and requests that Dr. Flyte write a new gospel proclaiming its powers and existence.

Dr. Flyte joins Sheriff Hammond and the women in the science tank. He recounts that he was a professor who once wrote a book about the “Ancient Enemy,” a powerful creature from deep within the Earth that would surface occasionally to feed. He explains that, like a tapeworm, the creature would gain the memories, knowledge, and skills of anything it ate. The creature itself is an amorphous blob that can take any shape, but also separate itself and creating “phantoms” like the moth creature. It can then send out those phantoms to do its bidding without showing itself. He believes that the Ancient Enemy wiped out the dinosaurs, the Mayans, and the lost colony of Roanoke. He was fired for his theories (thus why he now works for a tabloid). Dr. Flyte then says he thinks the creature learned about god by ingesting humans, and due to its immense power, now believes it is a god. Sheriff Hammond notes that the Ancient Enemy is still just a creature and can be killed.

We cut to the future. Dr. Flyte is on TV, telling the world the story of the Ancient Enemy. Some patrons in a bar state their disbelief of his story. Another patron laughs at their doubt, and when the camera pans over, we see the laughing patron is the phantom “Deputy Wargle,” who has somehow managed to survive the bacteria. This clearly suggests that the Ancient Enemy still lives. 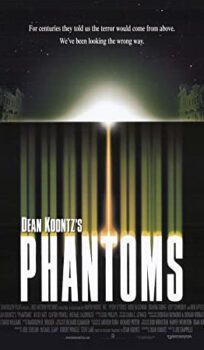