POOPER:
The trial of Phil Spector is declared a mistrial due to a hung jury.  Because of her illness, Linda is unable to defend him at his retrial.  At the retrial, Spector is found guilty of second degree murder and sentenced to 19 years to life in prison.

LONG VERSION:
Famous record producer Phil Spector (Al Pacino) is accused of murdering his girlfriend, actress Lana Clarkson.  He has hired Bruce Cutler (Jeffrey Tambor) to be his attorney, namely because he had successfully defended John Gotti.  Cutler asks Linda Kenney Baden (Helen Mirren) to be his top adviser.  Linda agrees, even though she has pneumonia (she is suffering from it for the entire movie).

Lana Clarkson was killed when a gun was placed in her mouth and it went off.  Spector claims it was suicide, but the DA believes he killed her.  Even though there is no direct physical evidence that Spector pulled the trigger, Cutler says that the jury will convict him anyway.  He owns several guns, he has threatened women with a gun in the past, and he is just not a nice person.  Cutler also believes that a jury will not allow another celebrity to get away with a crime.

When Cutler leaves the case to help another client, Linda takes over as lead defense attorney.  She knows that the only way she can get the jury to have reasonable doubt is to demonstrate in court that there was no way Spector could have killed Lana.  However, the judge won’t allow a physical demonstration; she can only use expert testimony.  Because she now can’t do a demonstration, Linda feels the only way to get Spector acquitted is to place him on the stand.  If she can show the jury he is just eccentric and not crazy, they might sympathize with him and find him innocent.

After a tense rehearsal and a long conversation, Linda and Spector believe they can pull it off.  But all that changes when Spector arrives in court the next day wearing what resembles a clown wig (he wore a normal wig in court up to this point).  He claims he’s doing it in honor of the artists he’s worked with in the past.  Linda knows that he won’t be taken seriously if he testifies while wearing that wig, so she decides to call the ballistics expert to the stand instead of Spector.

Title cards at the end of the movie state that a mistrial was declared due to a hung jury.  The DA immediately announced there would be a retrial.  Because of her illness, Linda was unable to defend Spector at the retrial.  At the retrial, Phil Spector was found guilty of second degree murder and sentenced to 19 years to life in prison. 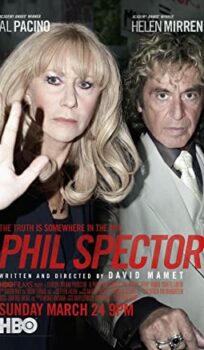