Carl realizes Bob is his father, but they get a chance to discuss it. Felicity hooks up with Marianne’s friend Margaret, and Carl and Marianne reconcile and he loses his virginity to her.

The Maritime Safety bill passes and Pirate Radio is set to be shut down at the new year. When Pirate Radio goes silent at midnight on New Year’s Eve, only to return a minute later, Dormandy sends Twatt with several boats to arrest the crew.

A fishing boat has been left where Pirato Radio docks, but the ship’s engine explodes. They continue to broadcast as the ship sinks, sending out their coordinates, but Dormandy tells Twatt not to help them. Carl pulls Bob to safety while forcing him to abandon his record collection. The Count stays below to broadcast until the last possible minute. At this last possible minute, hundred of boats commanded by Pirate Radio listeners who heard the coordinates show up to rescue them. Simon (who finds his #1 fan and kisses her) and the Count join everyone else on the boats, and they head back to England.

A postscript notes that there are now many radio stations that play all kinds of music, all of the time. 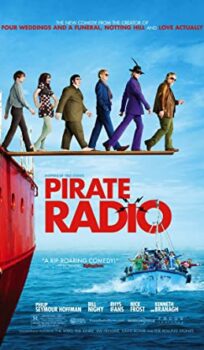