The film weaves around between different stories until finally revealing the link between the characters.

Parents (Gena Rowland & Sean Connery) are set to renew their vows at their 40th wedding anniversary. He’s just been diagnosed with a tumor, this dredges up unresolved business from 25 years ago as they finally hash it out over an affair he may or may not have had. In the end, while he did not actually sleep with the woman in question, he did have an affair with her. He and his wife find they are still in love with each other.

Daughter Meredith (Gillian Anderson) has been burned romantically and is very resistant to the advances of architect Trent (Jon Stewart). However, he is persistent and she eventually begins to trust him and they start a relationship.

Meredith’s first husband, with whom she remains close, is dying of AIDS. His mother (Ellen Burstyn) comes to see him in the hospital and they have several long talks; he comes out and she confesses she never loved his father. He dies and is buried next to his partner who had died the year before.

Second daughter Gracie (Madeleine Stowe) is having an affair with a priest (Anthony Edwards) while her determinedly oblivious husband (Dennis Quaid) takes improvisational acting classes. Neither finds what they are seeking in their respective escapes. At the parent’s vow renewal they hesitantly discuss trying to save their marriage.

Third daughter Joan (Angelina Jolie) is a hard partying, hard drinking actress who despite rather obvious charms, cannot get the reticent Keenan (Ryan Phillippe) to go on a date with her. She persists and he admits that he contracted at STD from his now deceased ex-girlfriend (HIV is hinted at, but not stated) and had been afraid to become involved with anyone as he fears infecting them. They resolve to make it work and begin to date.

All three daughters and respective partners show up to the vow renewal. 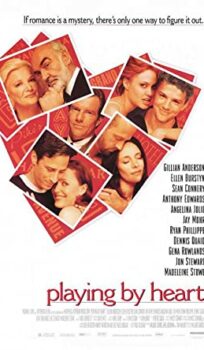