POOPER: Lassard, Schtulman, and Mahoney succeed in locating the Scullions’ hideout, and with the help of Mahoney’s fellow rookie officers, they arrest the gang. Tackleberry falls in love with his veteran partner, Sgt. Kirkland, and marries her at the end of the movie.

LONG VERSION: Despite initial hostility from Tackleberry (David Graf) over having a woman as his veteran partner, he and Sgt. Kirkland (Colleen Camp) discover their shared interest in firearms, and immediately hit it off. They end up falling in love with each other, and Tackleberry loses his virginity to her.

After the Scullions destroy an anti-crime street fair that Capt. Lassard (Howard Hesseman) organized, Lassard decides to step down as Captain, feeling that he has failed. Lt. Mauser (Art Metrano) succeeds him, and he quickly orders Schtulman (Peter Van Norden) and all of the rookie officers into the squad room. There, he demands to know who was responsible for him getting an unwanted body cavity search the week before, but they all keep quiet. After he threatens them all with suspension if none of them speak up, Mahoney (Steve Guttenberg) owns up to having set him up, and is suspended. Schtulman stands up for him, saying that he’ll be suspended with him.

Later, Mahoney, Schtulman, and Lassard meet up at a bar to discuss the Scullions. After Lassard complains about how nobody knows where their hideout is or who their leader is, Schtulman suggests that Mahoney should go undercover into the gang to find out all of that information. Mahoney reluctantly agrees, and dons the disguise of a street thug he names “Jughead.” He executes a crazed, violent outburst in full view of two Scullions, Flacko (Church Ortiz) and Mojo (Christopher Jackson), impressing them so much that they decide to take him to meet their leader, Zed (Bobcat Goldthwait), tomorrow to discuss him joining the gang. A few hours before the meeting, Lassard and Schtulman fit Mahoney with a wire that Schtulman had modified from a Mr. Microphone, which has a defect of picking up random radio sportscasts.

Later on, Flacko and Mojo pick up Mahoney and bring him to the gang’s hideout in the old abandoned zoo to meet Zed. Shortly after Mahoney meets Zed and repeats the gang’s location into the microphone, it gives off a sportscast, blowing his cover. Meanwhile, Lassard radios all units to go to the old zoo, and Mahoney’s fellow rookie officers (minus Tackleberry, who is with Sgt. Kirkland meeting her family) – along with Fackler’s (Bruce Mahler) veteran partner Dooley (Ed Herlihy) – head there. They meet Lassard and Schtulman outside the entrance, and as they start formulating a plan of attack, Mauser intervenes, and he rudely asserts his leadership.

As Mahoney is fighting for his life in a knife fight with Zed, Mauser tries to execute a surprise attack with Fackler, but it fails due to Fackler’s accident-prone nature. While Mauser ends up looking like a big fool, Mahoney’s friends launch their assault and subdue and arrest the gang. Zed tries to escape with Mahoney up a stairway, but Lassard stops him at the top. Mahoney ends up knocking Zed back down the steps, and Hooks (Marion Ramsey) arrests him at the bottom.

Lassard is later reinstated as Captain, and the movie closes with Tackleberry and Kirkland getting married, with Cmdt. Lassard (George Gaynes) and all of their fellow officers in attendance, and they head off for their honeymoon in a monster truck. 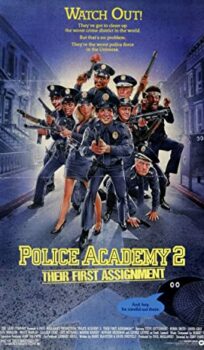