POOPER:
Cmdt. Lassard and his officers and cadets end up foiling a huge robbery attempt by a gang of thieves at a charity regatta and save the life of Governor Neilson in the process, while Cmdt. Mauser and his men prove to be ineffective during all of this. This sways the evaluation committee into letting Lassard’s academy be the only police academy in town.

LONG VERSION:
At a joint academy meeting on the final day of the evaluation competition, Commissioner Hurst (George R. Robertson) tells Cmdt. Lassard (George Gaynes) and Cmdt. Mauser (Art Metrano) that he will be accompanying Governor Neilson (Ed Nelson) to the charity regatta being held down at the marina, and he wants one cadet from each of their academies to go with them. Lassard selects Hedges (David Huband) while Mauser selects both Baxter #1 (R. Christopher Thomas) and Baxter #2 (David Elliott), with Capt. Proctor (Lance Kinsey) telling a protesting Sgt. Mahoney (Steve Guttenberg) that those two were just as good as one.

As Hedges strolls near the kitchen inside the marina, he looks in and discovers all of the busboys donning masks and readying revolvers, revealing themselves as a gang of thieves plotting to rob all of the attendees. He radios for help seconds before he is caught by one of the gang members. Lassard and his officers and cadets immediately head for the marina, but Mauser and Proctor dismiss it as a joke since the Baxters never radioed for help themselves, though that was because they had fainted after two gang members held them up at gunpoint.

Lassard and company take jet skis over to the marina and start laying out and arresting the gang members. However, as they do so, the leader (Doug Lennox) and a few of the thieves get away with Governor Neilson in a motorboat. Mahoney and Cadet Adams (Shawn Weatherly) chase after them on their jet skis, with some of the other officers and cadets following as soon as the last of the gang is subdued. Mauser and Proctor eventually find out that what is happening at the marina is no joke and try to go get the fleeing crooks themselves in a rowboat, but they quickly prove to be of no help.

After a lengthy chase around the harbor, Mahoney jumps onto the leader’s boat and causes it to plow through a boathouse right into the second floor of the marina. Mahoney and Governor Neilson emerge unscathed from the boat, and the leader – who fell to the ground in the crash – is arrested by Sgt. Hooks (Marion Ramsey).

Because of the heroism of Lassard’s officers and cadets and the ineffectiveness of Mauser and his cadets, the evaluation committee opts to have Lassard’s academy remain open. Adams, Hedges, Zed (Bobcat Goldthwait) (who had given up his life of crime), Sweetchuck (Tim Kazurinsky), Nogata (Brian Tochi), Kirkland (Andrew Paris), and Mrs. Fackler (Debralee Scott) graduate from the academy. 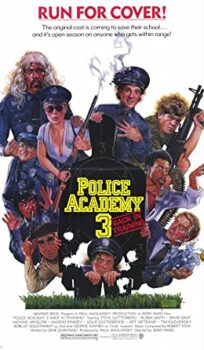