Pooper:
Conner decides to reunite with his former band mates at the Poppies rather than perform solo. This performance gets his career and life back on track.

Long Ending:
The Style Boyz were a beloved pop-trio consisting of Conner aka “Kid Conner” (Andy Samberg), Owen aka “Kid Contact” (Jorma Taccone), and Lawrence aka “Kid Brain” (Akiva Schaffer). They are particularly well known for a song and dance called the Donkey Roll. Conner is the breakout star of the group and ends up finding huge solo success with his debut album “Thriller Too.” The band eventually breaks up after Conner refuses to give credit his band mates in public. He then officially brands himself as a solo artist named Conner4Real. Lawrence leaves show business to live on a farm, and Owen is relegated to playing Conner’s pre-mixed beats as a helmeted DJ.

The movie follows Conner as he releases his second solo album to disastrous results. Various mishaps and setbacks occur, including:

Conner ultimately moves back in with his mom and sinks into a depression. His publicist Paula (Sarah Silverman) eventually coaxes him out of the house to attend a concert Owen is throwing. Remembering how talented Owen is, he and Conner reunite and then visit Lawrence. Conner realizes he can continue to be a Style Boy AND a solo artist and the friends reunite and begin making new music together. Paula manages to get Conner a gig to close out the major music awards show called the Poppies. He is booked to do one solo song and then a song with the Style Boyz.

At the awards show, Hunter makes an ass out of himself on TV, angers Mariah Carey (herself) and is fired by Harry. Conner is told that the show has gone on too long and he only has time for one song. After deliberation, he chooses to go forward with a performance of a new Style Boyz song. They are joined onstage by Harry (a former boy band member himself), Conner’s chef and aspiring singer Tyrus (Justin Timberlake), Michael Bolton (himself) and Usher (himself). They also perform the donkey roll together.

The film ends with Conner back on top of the music world, happy with his life… and being attacked by a wolf.

In a post-credits scene, we see how deeply unhappy but pop-culture obsessed the members of CMZ really are. 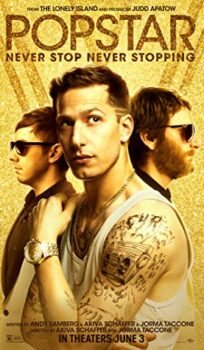