Story:
Zordon was betrayed by Rita Repulsa 65 million years ago in an effort to obtain Earth’s Zeo Crystal, a mystic object that enabled Earth to support life. To stop Rita, Zordon ordered Alpha 5 to send the meteor which supposedly wiped out the dinosaurs.

In the present day, five teenagers in Angel Grove discover the power coins buried by Zordon at the Angel Grove gold mines. They then discover the ship housing Alpha 5 and a visual form of Zordon’s consciousness. Doubtful of the new rangers’ abilities to morph, Zordon leaves them to train with Alpha 5. While the rangers get to know each other, Rita’s corpse is exhumed from the ocean by a fishing boat. Her green power coin activates and allows her to regenerate her physical form. Her goal is to assemble enough gold to resurrect the spirit of Goldar, a familiar she summoned 65 million years ago to steal the Zeo Crystal to control life in the universe.

Billy discovers that the Zeo Crystal is buried underneath a Krispy Kreme Doughnut Shop. The rangers discover that when they are able to morph, Zordon will be able to resurrect himself in physical form, and all five go rogue. Rita visits Trini at home and summons the rangers to the old ship dock. Without their morphing powers, the rangers are no match for Rita, who ties them up and demands the location of the Zeo Crystal. After Billy gives it up, she drowns him. The rangers bring Billy back to the ship, where Zordon sacrifices his return to mortal form in order to resurrect Billy.

Rita manifests enough power to fully assemble Goldar as a giant walking form of liquid gold and proceeds to the doughnut shop where she samples the strawberry glaze with sprinkles before Goldar lays waste to it, along with most of the small town of Angel Grove.

The morphed rangers call upon the ancient Zords to fight Goldar, but the monster is too powerful, and the rangers must combine their vehicles into the Megazord. The Megazord finally defeats Goldar using the suplex technique taught to the rangers by Alpha 5. After stabbing Goldar with both Megaswords, Rita attacks, but is slapped by the Megazord so hard she is propelled into space (a la “Team Rocket’s blasting of again!!”) where she is shown freezing.

The rangers are hailed as heroes of Angel Grove, though their identities are never revealed.

Mid-credits scene: The detention teacher calls for a student by the name Tommy Oliver (the green ranger).

Fun cameo: After Goldar is defeated and Rita slapped into space, a couple in the crowd is played by Amy Jo Johnson and Jason David Frank (the original pink and green/white/red/black rangers) 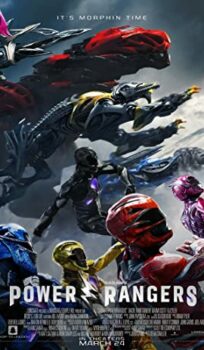