The movie begins as an overweight, 16-year old, illiterate Precious Jones ( Gabourey “Gabby” Sibide) reveals in a mix of voiceover and both her grim reality and her fantasies. It is Harlem, 1987, and Precious and her mother live in a tiny dirty apartment. Precious is constantly abused, both emotionally and physically, at home by her mother Mary (Mo’Nique), and at school she enjoys her math class but is expelled from the school when the principal finds out that she is once again pregnant. The principal of the school does recommend Precious to an alternative GED program.

As the movie progresses we learn more about Precious’s two pregnancies. The father to both her children is also her own father, and this in part explains Mary’s fury towards Precious. Her daughter has “stolen her man,” so to speak. Precious’s daughter has Down’s Syndrome, and lives with Precious’s grandmother, but the daughter comes over when the social worker visits so Mary can continue to collect welfare for the child. We see how Mary tosses aside Precious’s daughter the minute the social worker leaves.

At the new GED program, Precious is surrounded by troubled girls and mentored by a stern but loving teacher named Ms. Rain (Paula Potter), who insists that Precious improve her nearly non-existent reading and writing skills. Precious is making slow but steady improvement in her schooling, and also opening up to her social worker Ms. Weiss (Mariah Carey) about her abusive mother and how her father’s rape resulted in the two pregnancies. On a school field trip to the museum Precious goes into labor and for the first time is brought to the hospital by her teacher. She reveals that this is the first time she has ever been to a doctor. Precious has a son she names Abdul, and refuses to give the son up for adoption despite the recommendation of both Ms. Rain and Ms. Weiss.

After three days of feeling loved and cared for at the hospital she returns home with her baby. Mary is at home and at first seems conciliatory and asks to hold the baby. But she soon unleashes a storm of physical abuse towards both the baby and Precious, at one point throwing a television set down the stairs at her daughter and grandson. Precious flees her mother’s apartment and is taken in by Ms. Rain. After awhile Ms. Rain finds Precious a halfway house.

One day Precious’s mother visits Precious at the halfway house and tells Precious that her father is dead. Precious says “Is that all?” Mary says additionally that Precious’s father died of AIDS. Precious gets tested and sure enough, is HIV positive. Although she is devastated by the news, she remains determined to care for her son and finish school.

Precious continues her visits with Ms. Weiss, the social worker. During one session she steals her file and sees that the social worker has recommended a very low paying job for Precious. Precious realizes it is a very low paying job and, emboldened by her support group at the GED school, refuses to drop out of school to take the job. The social worker also sets up a meeting between Precious and her mother. Ms. Weiss confronts Mary about the years of abuse Precious had to endure, and in a tearful but defensive speech, Mary admits that she first let Precious’s father rape Precious when Precious was three and still being weaned. The revelations shock Ms. Weiss. Mary then brings Precious her daughter. Precious realizes that her relationship with her mother is hopeless. Precious thanks Ms. Weiss for her efforts but says that she can no longer help, and tells her mother Mary that she will never see her again.

The final shot is of Precious with both of her children in her arms. The movie does not say what happens to her, but we do realize that Precious has gained back both her children and her dignity. 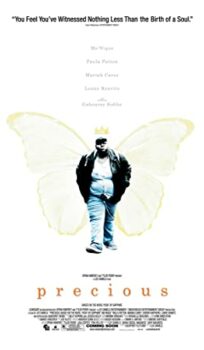