Black-ops mercenary Royce (Adrien Brody), South American sniper Isabelle (Alice Braga), doctor/physician Edwin (Topher Grace), and five others are abducted by Predators and dropped via parachute on to an uninhabited planet that the aliens use as a hunting ground.  They are selected so the Predators can improve their hunting skills with each group of humans they come across, making them more efficient killers.  It is also revealed that over time, these Predators, which always hunt in groups of three, become “Alpha Predators” and hunt other less-skilled Predators (like the ones seen in the other movies) that fail in their own hunts or “misbehave”.

Slowly, the humans are picked off one by one.  Along the way, they come across the Predator campsite/trophy grounds, where they find a Lesser Predator alive and tied to a post (important later).  The group is ambushed and forced to leave it there.  Royce and the others also discover Noland (Laurence Fishburne), a former Air Calvary commander that was abducted ten hunting seasons ago and has survived by hiding and scavenging supplies from the other humans.  Noland tells Royce how the Alpha Predators have a dropship and use it every hunting season, and Royce comes up with an idea to commandeer the Predator ship to return to Earth.

Royce and his group take shelter with Noland, but Noland goes insane and tries to kill them (so he can later take the group’s equipment for himself).  When Noland tries to leave the group behind as bait, he is killed by the lead Alpha Predator.  Spetznaz commando Nikolai, one of the soldiers in Royce’s group, sacrifices himself and kills one of the three Alphas with a bomb strapped to his body.  A Yakuza henchman in the group, Hanzo, gives the group time to get to the dropship by dueling with another Alpha Predator.  Hanzo uses a katana to kill the second Alpha, but dies in the process.

Edwin’s foot gets caught in a Predator man-trap, and Isabelle decides to stay behind and help him while Royce selfishly makes a run for the dropship himself.  Edwin and Isabelle are captured and thrown in a hole by the Lead Alpha to be killed later.  Meanwhile, Royce realizes his plan to steal the Predator ship has a hitch: he wouldn’t know how to fly the craft.  Royce returns to the Predator campsite and cuts down the Lesser Predator that was taken prisoner.  Using the equipment from one of the slain Alphas, the Lesser Predator activates the dropship and tracks it to their location.  Royce runs for it.  At the same time, Edwin attacks and drugs Isabelle inside of the hole.  Edwin admits he was “selected” by the Predators because he was a serial killer back home.  The Lead Alpha Predator destroys the dropship with a self-destruct device as it takes off and kills the Lesser Predator in combat.

When things look like they are at their worst, Royce, who actually left the dropship behind, pulls Edwin and Isabelle out of the hole.  He wounds and then booby-traps Edwin to set a trap for the Lead Alpha, which gravely wounds it.  Isabelle shoots the Alpha with the last bullet in her rifle, and Royce covers himself with mud (like Arnold did in the first movie) and decapitates the Lead Alpha with a broken-off post.

Some time later, Royce and Isabelle, dazed and barely alive, look up to find more humans, Aliens, and Predators being dropped in for the next “hunting season”.  Royce helps Isabelle up and begs her to hold on, vowing he will get them off of the Predator planet no matter what it takes. 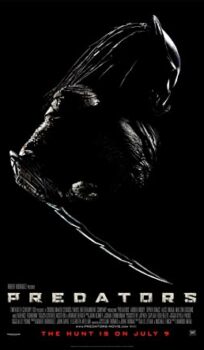