Ms. Perkins (Holly Sampson), with Chuck’s (Gerard Karsenty) help, recovers the mind control device from Paula (Amy Brassette) in a bar, who was wearing it and took on the feelings and thoughts of Tiffany’s (Alexis Thorpe) heat-afflicted cat, Sunshine, whom Chuck had wear the necklace part of the device but didn’t reverse the signal to prevent Paula from acting like it.

Due to Chuck entering Mrs. Parker’s (Cecilia Bergqvist) mind and meeting Paula’s friends, Stacy (Summer Altice) and Bambi (Cindy Campbell), earlier in the film, where he lies to them about his sexual prowess, they hook up with him. Howard (Will Burke) helps Tiffany find her cat and gets the necklace off it, but before he does he reveals his true name to her (he addressed himself as Tom, after Tom Cruise, whom he idolizes), and that he fell for her the first day he saw her. They kiss, and a passing Mitch (whom Howard is always bullied by) sees this and crashes his car out of shock. When Tiffany goes to change for their pre-arranged lunch date, Mitch comes up to Howard and asks him how he gets the chicks he gets, referring to Tiffany and when he appeared at Ms. Perkins’ apartment to find Howard there, even though Howard and her did not sleep together. Howard arranges to meet him next week so they can discuss how Mitch can alter his personality a bit to fare better with women.

Ms. Perkins soon comes by, and the device’s data in Howard’s head that has given him his powers is returned to the device. The comical effect of its removal soon sends Howard flat on his back, and Ms. Perkins thanks him and leaves. Tiffany comes back and notices Howard lying down, and gets on top of him like how he was accidentally on top of her near the start of the film and they playfully horse around. In a voiceover, Howard said his Tom Cruise dream was no more, that reality has won out, and that was pretty cool.

*For anyone who likes this film but want to see more sex scenes, check out the softcore erotica feature Emmanuelle 2000: Emmanuelle Pie. It is a re-edited version of this film, the only changes being the storyline tweaked a bit to accommodate the storyline of Emmanuelle, played by Holly Sampson, and the added sex scenes. 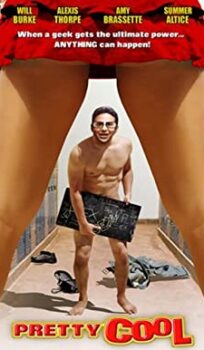