Abe (David Sullivan) and Aaron (Shane Carruth) accidentally create a form of time machine, after numerous experiments in Aaron’s garage. Initially they use the knowledge they gain, by going back in time and playing the stock markets. Then they realise the further back in time they go, the adverse affects it has on their bodies, as they start to suffer blackouts and nose bleeds. In the end they are creating copies of themselves who are interfering with their lives. The pair’s final act is to save Aaron’s girlfriend Rachael who is shot by her ex-boyfriend at a party. The two of them remove the shells from his shotgun, and Aaron arranges it so he goes to jail. The final act sees the pair split up, as Abe believes they are causing paradoxes and they have to stop. Aaron leaves and travels to another country where we’re lead to believe he is working to create a larger box for groups of people time travel 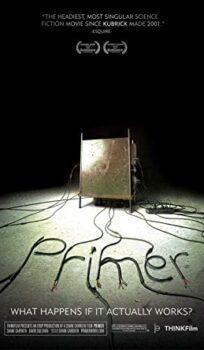